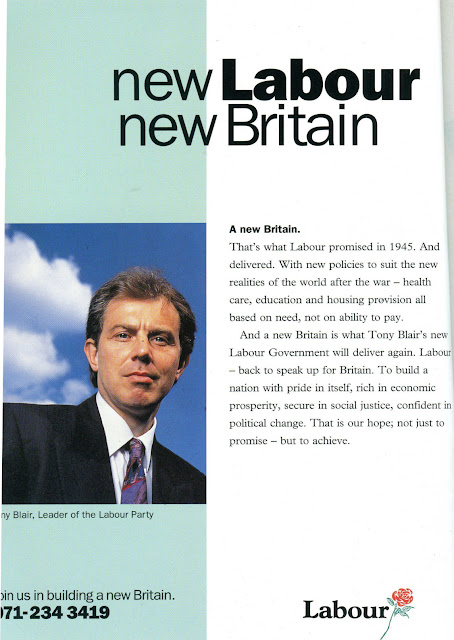 The Conservatives are not alone in the field of announcements and promises. In the interests of balance (and apologies once again for the poster) I have attached on from 1997 and the NEW Labour Party. This announcement by Tony Blair is also rich in vision and promise - "to build a nation with pride in itself, rich in economic prosperity, secure in social justice, confident in political change"
Thirteen years later I think we can safely say that paradise has definitely been put on hold. - those who are looking for jam tomorrow are getting perturbed In many respects you could argue that New Labour achieved the opposite of what it set out to do - a bitterly divided and corrupt nation, economic meltdown, social injustice and a stagnant political system that is long past its sell-by date. But that is the nature of life, you set out with good intentions but someone/something always comes along and scuppers it - in my case I had the double whammy of Thatcher and Blair.
Posted by ceegee at 3:58:00 pm