Who Do You Know?

I am getting rather worried now. My previous "musings" have mentioned Deputy Prime Minister Clegg on more than one occassion, the most recent being his "hawkish" stance in the NATO bombing of Libya. I would like to move onto different topics and areas of concern, but everytime I contemplate this, DPM Clegg delivers some more of his thoughts about the country and it's plight.
Yesterday it was his views on social mobility. This is the gist of what he said
"Deputy Prime Minister Nick Clegg says he wants to stop people getting on in life purely because of "who they know". As he launches the government's social mobility strategy, Mr Clegg said no-one should get an unfair advantage because their parents have "met somebody at the tennis club or the golf club".
He told the BBC: "Sadly, we still live in a country where, invariably, if you're born poor, you die poor. Just as if you go to a low-achieving school, you tend to end up in a low-achieving job."
Of course what DPM does not recognise is that his Conservative coalition partners have no interest whatsoever in improving social mobility, and never have had. A succession of Tory initiatives since 1979 have focused on ensuring that the "old order" is restored and then maintained. Even in the last few months the Coalition government have gleefully announced draconian increases in tuition fees and and scrapping the Education Maintenance Allowance. These measures have in effect  erected major financial barriers for those people from low and average-income backgrounds who would aspire to "improve" their station in life. They act as a brake on social mobility rather than enhancing it.
Of course the people of Crookes (Sheffield) have no chance as the Crookes Golf Club and the Crookes Tennis Centre have still to make an appearance. And so we are stumped according to DPM Clegg's analysis.
In my belief, one of the bedrocks of British society is class. It permeates every strata and section of society and is deeply etched in the nation's psyche. The Tory party is above all a party built on class and the "natural order" and believe me it has no intentions of initiating radical and far reaching measures to improve social mobility. If fact it will do its damnest to ensure that this country will remain "a land fit for toffs to live in"

As the noted French political thinker Alexis de Tocqueville once said t
The surface of society is covered with a layer of democratic paint, but from time to time one can see the old aristocratic colors breaking through."

Given the scale and the vehemence of this coalition's attack on the "ordinary people" of this country, I feel the "paint "will become thinner and more worn within a matter of months rather than years. 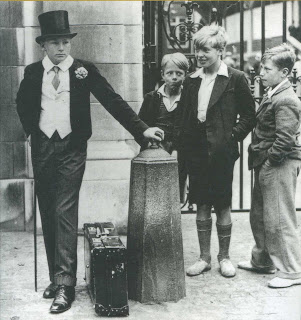 Photo taken in London May 2015
Note It is a fact that although just 7% of people attend private/independent schools, they account for 70% of High Court Judges and 54% of CEOs of FTSE 100 companies. Perhaps DPM Clegg would like to analyse how this situation has arisen, and what is he going to do about it. Anyone for Tennis!!
Posted by ceegee at 11:21:00 am