The researcher who so kindly supplied me with the information has contacted me again with information relating to Fred's nephew,  Douglas Harry Rawson who served in the British Army Service Corps in World War 1

Douglas  was the first child of Ann Hunter, Fred's elder sister. He was born on 11th May 1893 at 72 Burns Road Crookesmoor Sheffield and baptised on 2nd June 1893 at St George Church Brook Hill Sheffield

Ann married a Joshua Almond St John church, Blackpool 26th June 1907 and she is a widow on the register. They had a daughter Margaret Almond in 1909 who would have been Douglas,s half sisiter

They had three children

Father Henry is not with the family on the 1901 census, Ann and children are living with her parents at Bradley Street, Crookes Sheffield. Was he away fighting in the Boer War?

Douglas Harry married an Elizabeth Mason on June 21st 1913 at the Primitive Methodist Church, Chapel St, Blackpool, Lancashire, England.
Douglas and had two children
Douglas who was born and died in Q3 1913
Harry born 1914. Harry died Jan 17, 1982 • Poulton, Lancashire, England
The family lived at 5 Beford Road Blackpool
Douglas enlisted at Aldershot on 27th November 1914 for the duration of the war

Douglas died on 2nd November at Fargo Hospital, Rolleston, Salisbury, Wiltshire and was laid to rest at Layton Cemetery Blackpool. 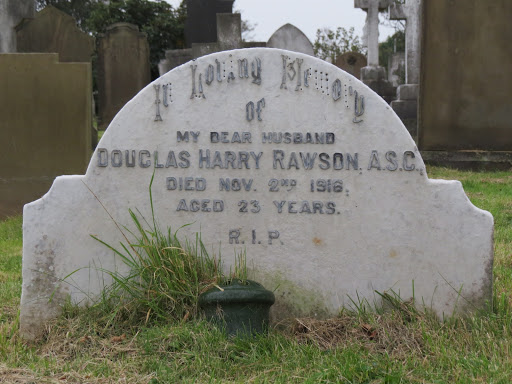