I've just posted this artcle to the site. George was awarded the George Cross posthumously for his actions at Khartoum airfield in 1942. His father Stephen was killed in Alexandria in Egypt on 4th November 1918 (seven days before the war ended) However it is a strange co-incidence that both father and son died for their country in separate wars and yet are buried on the same continent. Their graves are separated by nearly 1,100 miles. 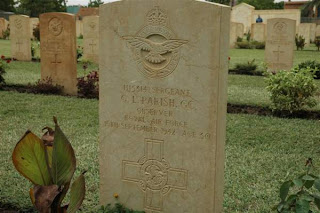 George's grave is in the immaculately kept Khartoum's Military Cemetery in the Sudan - a country that I'm unlikely to visit in the forseeable future
Posted by ceegee at 1:18:00 pm