I came across this certificate yesterday which I had not seen for years. 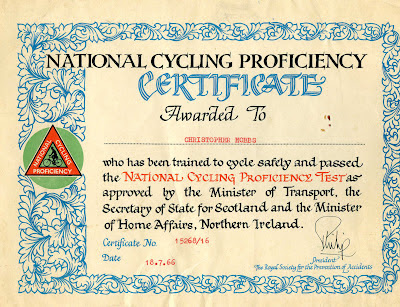 I remember the test quite well which is surprsising to say the least. But what I had forgotten is the date I took the test. The certificate was signed - 18th July 1966, twelve days before England's last major success in an international football tournament.

And so I must have took the test during the World Cup campaign of 1966.

No immediate gain ensued for the test, but it did put me in a good position during the 1980's when Thatcher's goverment was telling everyone who did not have a job to "get on their bikes."!!