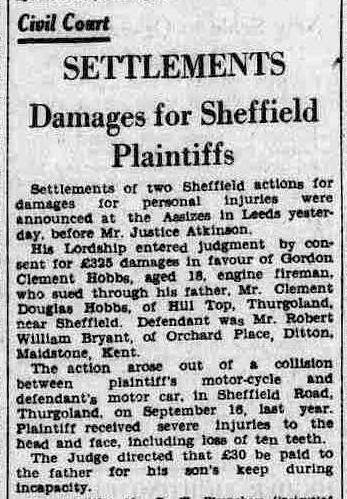 From The Telegraph and Independent 7th July 1939

My dad only spoke about it once and that was towards the end of his life. He said that he lost half his teeth when he came off his bike in a collision and ended up hitting a wall. He was given the choice of having "them put back" or "having the lot out" He chose the latter!

My dad and his dad Clem rode bikes all the time but it is the one thing my dad put his foot down about - I was not to ride a motor-bike at all. Of course I did not know about his accident until years later which explains why he did not want me to ride a bike.

I only found this out last week. The award is about £19000 in today’s money which was a sizable sum for a 18 year old in 1939. At least he could afford some top notch dentures!

I have also left the article that proceeded the one that related to my dad's award. It refers to the thoughtful musings of Mr Beverley Baxter in the previous nights Sheffield Star

Less than two months later war was declared mmmm....and we all know how Germany resolved their labour shortages!
Posted by ceegee at 4:37:00 pm