The Actions of a Bum-Balliff and the Death of Hugh Saville - Broad Lane, Sheffield 1890

I have just posted an article to the site regarding the death of a 44 year old labourer Hugh Saville at 125 Broad Lane, Sheffield on November 23rd 1890

The sub-title is "A remarkable case of self-destruction and a wretched story of misery and want". And indeed it was. It received coverage in the local and regional press and the inquest was reported in detail. This cutting is from the Nottingham Evening Post dated 27th November 1890 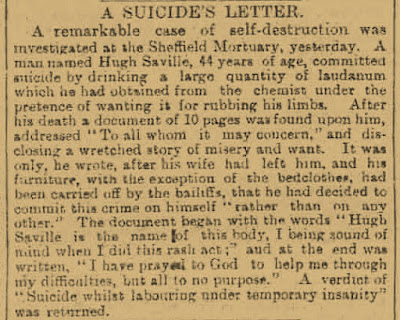 A few points emerged out of it, one of which was the lack of information about the Sheffield Public Mortuary on Plum Lane. It was approximately adjacent to the Museum pub on Leopold Street and was part of the Sheffield Medical School. This is where this inquest and many others were held in the late nineteenth century but there seems to be very little research about the institution.