I just cannnot seem to get away from involving myself in Methodist Chapels in Sheffield. The other day I sat down and read through this months edition of Grapvine Magazine and came across this photograph in the excellent column "Immortal Words." The writer Jason Heath uses archive photographs that are in the possession of his family business John Heath & Sons. and places them in a historical context. 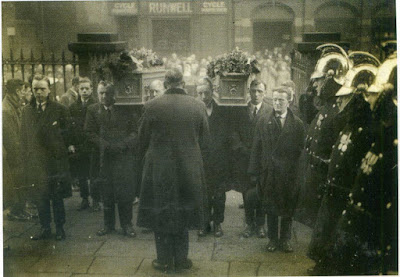 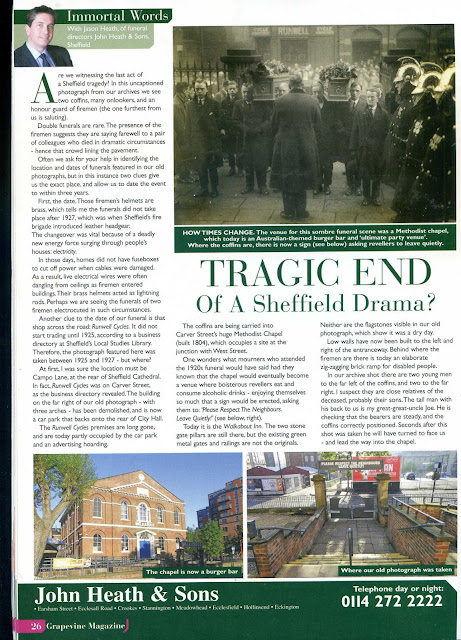 Jason identified the location as Carver Street Methodist Chapel - the shop Runwell Cycles was opposite the main entrance. Furthermore Runwell Cycles did not start trading until 1925 which dates the photograph post 1925. Jason points out that double funerals are rare and given the presence of  fireman in full ceremonial dress concluded that the funeral was that of two of their colleagues. His great great uncle Joe officiated at the funeral - he is the man with his back to the camera checking that the coffins are steady and correctly positioned.

I did check first with the British Library Newspaper Archive but could find no instances of death in service for Sheffield firemen in the mid to late 1920's.

But I was familiar with the tragedy that befell the Melling family in November 1925 when two brothers James and Herbert lost their lives in a motor cycle accident near Bell-Hagg, Sheffield

I contacted Jason and referred him to the article. He confirmed that it was his firm John Heath & Sons that were the funeral directors that day. The boys' father Cllr. Melling was Chair of the Sheffield Watch Committee which would explain the presence of the ceremonial guard and the mourners were certainly dressed for a cold day in November.

A mystery solved but whilst I was verifying the material I came across some more information about the origins and history of Carver Street Methodist Chapel. I think I might be embroiled again at sometime in the future