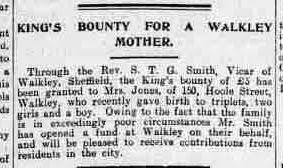 It also appeared in the Daily Mirror two days later.

A rare occurrence in 1907 and one that would have put a major strain on the meagre finances of the family. The King's Bounty which incidentally I had never heard of, approximates to about £335 in today's money. I hope that the family received further contributions to assist them in bringing the triplets up. And it would be fascinating to know what happened to the family in the years to come