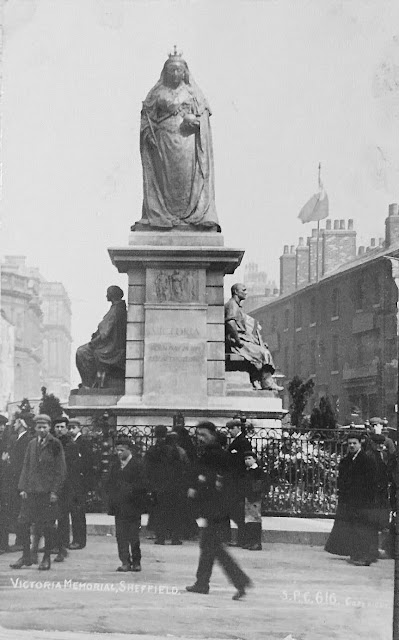 ""The bronze figure of a crowned Queen Victoria holding an orb and sceptre stands on top of a plinth of limestone blocks. The figure is about 3m high. She is attended by two bronze figures representing Maternity and Labour seated on either side of the main plinth, each about 2m high. 'Maternity' is a young woman holding a baby with her left arm around a young girl . 'Labour' is a young man sitting on an anvil with a sledgehammer propped against his left knee. The base of this bronze is signed: "ALFRED TURNER SC. 1904" - the '4' is somewhat indistinct. "

It was moved to Endcliffe Park on 24th February 1930 as part of yet another "road improvement" scheme that has tended to blight the area over the last century.

There are further details of the statue on the Sheffield History forum
Posted by ceegee at 3:18:00 pm