You may be glad or pained to hear that the last blog I posted was the 500th article since the blogs inception in November 2010.

To mark this occasion, and also keep within the themes of the blog, this is a cutting from the Sheffield Daily Telegraph dated 28th February 1901. For those who are not familiar with the term "nightsoil" it is defined by Wikipedia as " a historically used euphemism for human excreta collected from cesspools, privies, pail closets, pit latrines, privy middens, septic tanks, etc. This material was removed from the immediate area, usually at night, by workers employed in this trade".
But night soil was not allowed to be deposited in Effingham Road at any time and Mr John Callaghan was fined 10s (abt £43 in todays money) 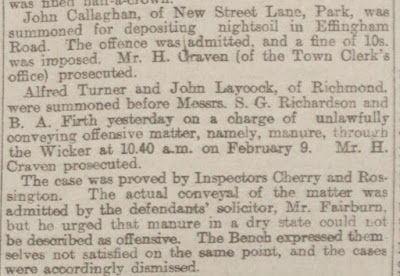 Of course, a couple of points arise from this offence - what was the official title of Inspectors Cherry and Rossington and what was their role. Was it just monitor the movement of manure around the streets of Sheffield or did they have a wider brief. Were they the forerunners of today's traffic cameras spying on the unlawful conveyancing of manures as opposed to traffic violations.

The other point is does the offence of "unlawfully conveying offensive matter on a public thoroughfare" still exist. Personally after seeing the amount of offensive matter that is shipped around the streets of Sheffield I doubt it! But if you do need to convey manure make sure it is dry and if apprehended refer to the case of Sheffield City Council v Turner and Laycock - February 1901 in your defence.

For those readers wishing to re-enact Turner and Laycock's journey on 9th February 1901 be warned - The Wicker has a complex traffic management scheme that defies logic but raises the most money in fines than any other similar scheme in the city.