Until the events of the last month "rowdy singing at midnight" is a common occurrence in the district of Crookesmoor (Sheffield) but it is many many years since a presiding magistrate called it a great nuisance. In most cases it is just part of living in an area that accommodates a large student population

It was rather interesting to come across this report from the 1st September 1927 when Mr Henry Dale who was described as a wrathful householder decided that the singing of "As Your Hair Grows White" was inappropriate at that time of night. 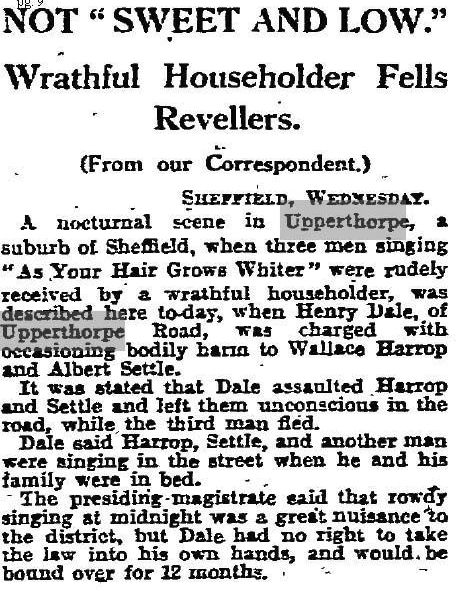 It must have been a ferocious assault that left two men unconscious in the road but apart from telling Henry that he had no right to take the law into his own hands, he merely bound him over for 12 months. Short of acquittal it was about the mildest sentence he could get. Perhaps the magistrate had some sympathy for Mr Dale and his actions
Posted by ceegee at 4:51:00 pm