As the nation enters into its seventh day of mourning following the death of Prince Philip last Friday, I thought it would be fitting to remember a previous visit to Sheffield by the Royal Couple on Thursday 18th November 2010.

The Sheffield Star dated Wednesday17th November 2010 carried a report on the following days agenda which was centred around the University of Sheffield. The report was accompanied by a photograph of the Queen that was taken in 1954 the last time a reigning monarch had visited the University. 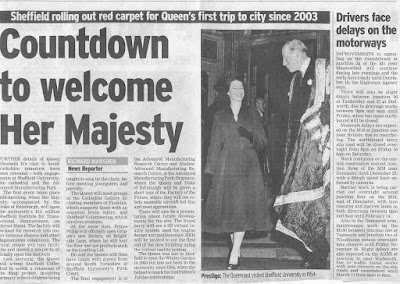 It was not the last time they visited Sheffield. The last time Queen Elizabeth II visited Sheffield was on Thursday 2nd April 2015 for the Royal Maundy service where she honoured 89 men and 89 women in recognition for their service to the church and local community.
It appears that thousands of people awaited the Queen's arrival outside the Cathedral. The Cathedral Choir was joined with Her Majesty's Chapel Royal Choir to accompany the Queen while she distributed two pouches of specially minted Maundy money to each recipient.
Remarkably this was the first time the Royal Maundy had been distributed in Sheffield since it's inception in the seventeenth century.
Posted by ceegee at 5:04:00 pm