"Hold on Blanche, we are in for it here" 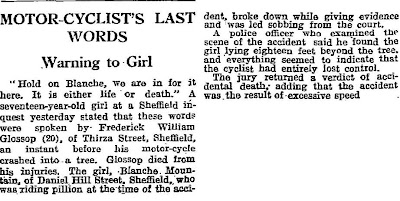 Unusually the report does not state where the accident took place.

and then these two entries

I wonder if she ever thought of Fred Glossop or told her children of what happened in November 1932?
Posted by ceegee at 10:20:00 am