From the Sheffield and Rotherham Independent dated 27th April 1899 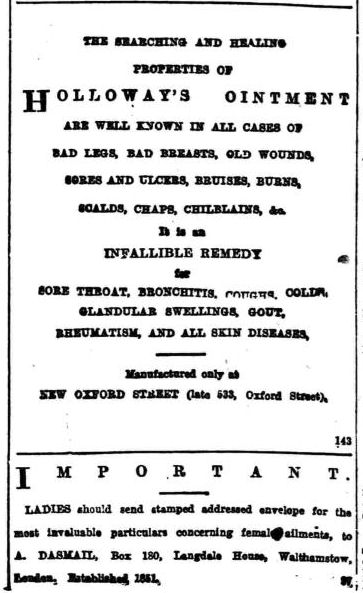 I could just do with some of Holloway's Ointment now!
But I am puzzled how the application of Holloway's Ointment can cure "bad breasts". In fact what are "bad breasts". I would like to know but I fear that putting the search term in Google may open the proverbial can of worms. In addition the advertisement below looks very suspicious - I wonder if it is a Victorian version of the "postal scam"
Note
Holloways ointments which cured "Cuts, wounds, burns and bruises, inveterate ulcers, chilblains, chapped hands, insect bites, boils, bad legs ... etc" according to the pots addressed 113 Southwark London and "Gout and Rheumatism" (instead of cuts, wounds, burns and bruises) in the later pots from 533 Oxford Street.
From 1842 - 1867 Holloways was situated at 244 Strand Street, from 1868 - 1881, 533 Oxford, 1881-1909, 78 Oxford Street and from 1910 - 1931, 113 Southwark Street.
Posted by ceegee at 12:13:00 pm

Email ThisBlogThis!Share to TwitterShare to FacebookShare to Pinterest
Labels: Holloway's_Ointment 1899