As this is the first post of 2013 may I take this opporunity to wish all my readers health and prosperity in the forthcoming year.

It has been a while since my last blog but I've hardly been slacking - far from it. After the publication of two books in the last year, I have rather a large back log of material to sort out. One of the main items was a scrapbook my late mother kept, in which she stuck family photos going back over a hundred years.

Many of these photographs I had never seen before, but thankfully my mother had labelled most of them and I have been able to tie them in with my reasearch. The problem was the actual scanning. My mother stuck then in a large scrapbbook with glue, and so I was unable to remove them. this meant manipulating each page a number of times until I could scan all the photos on that page.

They then had to be cropped, enhanced etc which took even longer. But the effort has been worth it. I have now started posting some of the photos of my ancestors to the website using


The Marriage of Fred and (Gertrude) May HEMSWORTH 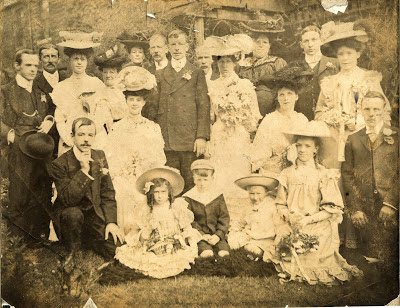 The house was owned/rented by the brides parents John and Elizabeth Travis. The house still stands and a search reveals that the property was last sold in 2005

I have not been to the house which is adjacent to Hillsborough Park but it is on the list!