Following on from my previous post, there is a photograph of the family that was taken in the summer of 1937. 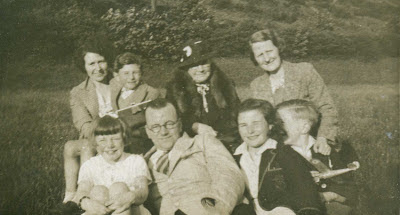 My mother is 7 years old and is at the front to the left, next to her dad Sid. Behind mum is Sid's older sister Connie holding her son Peter. The lady at the back in the centre is their mother and my great grandmother Mary Anne Hemsworth who had just turned 80!. On the right of the photo is my grandmother Lily who has an arm around her son Jack. The final person on the photo to the right of the photo is Connie's daughter Mary.

And so just another family photo - well not really, inasmuch as this photo was taken at Ashopton in the Derwent Valley, a village that was to be submerged just a few years later to create one of England's largest reservoirs.