This article is from The Daily Telegraph dated 22nd October 2000 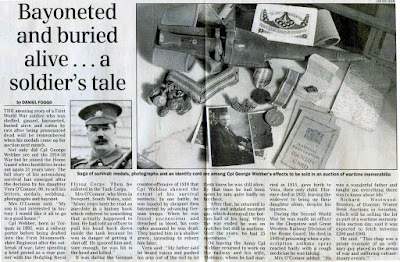 There is a rather pedantic discussion about what cap-badge George was wearing at the time he was being bayoneted and buried alive on the excellent Great War Forum. But apart from that there is very little information about George.

The irony is that George was eventually killed by a prescription asthma spray in 1949.It looks as though his asthma was caused by the inhalation of mustard gas that destroyed parts of his lower lung. They got him in the end!

A remarkable man to say the least
Posted by ceegee at 5:29:00 pm