And on the same page that the two unveiling's of the war memorials were reported, there was this report that shows another side of Sheffield after the war

It is from the Sheffield Daily Telegraph dated 28th June 1920 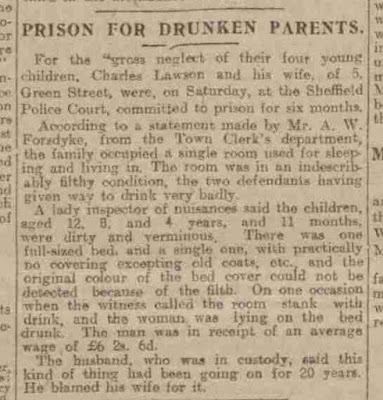 Green Street does not exist anymore - in fact I have been unable to find its location. The report is unequivocal in its description of the filth and sqaulor the family were living in. But what is remarkable is the statement that the head of the household Charles Lawson made in court. He said that this kind of thing, that is "gross child neglect" had been going on for 20 years and blamed his wife for it.

If that is the case and I have no reason to doubt Mr Lawson what were the "lady inspector of nuisances" and the Town Clerk's Department doing in that twenty year period. The report infers that more than one visit was made but it appears no action was taken. A familiar story

And what did Mr Lawson do in that period - nothing according to his statement, it was all his wife's fault. But I do find that difficult to believe! He should have received a far greater sentence as the family was his responsibility and not solely his wife's.

It would be interesting to know what happened to the family. I just hope that the children were not scarred by their childhoods but I think that unlikley