And following on from the last blog is this postcard from circa 1915. The father refers initially to the fact that in 1911 the Chancellor of the Exchequer David Lloyd-George inroduced maternity benefits.

His next reference to Lord Derby refers to a scheme that was introduced in the Spring of 1915 to bolster numbers in the armed services. Fuller details of the scheme can be found at this link but it had its origins in the simple fact that voluntary recruitment was never going to come up with the numbers needed to sustain a war that was consuming men and materials at an alarming rate. 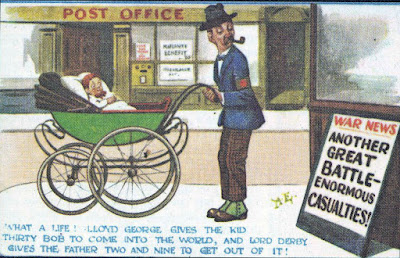 As with so many cartoons of this nature, the facts are true. Those that were attested and then mobilsed under the scheme faced a baptism of fire on the Western Front and their chances of survival were diminishing as the war progressed. "What a Life" indeed

MEMORIAL TABLET
(GREAT WAR)
Squire nagged and bullied until I went to fight,
(Under Lord Derby's Scheme). I died in hell –
(They called it Passchendaele). My wound was slight,
And I was hobbling back; and then a shell
Burst slick upon the duckboards : so I fell
Into the bottomless mud, and lost the light.
At sermon-time while Squire is in his pew,
He gives my gilded name a thoughtful stare;
For,though low down upon the list,I'm there;
In proud and glorious memory ... that's my due.
Two bleeding years I fought in France, for Squire:
I suffered anguish that he never guessed.
Once I came home on leave: and then went west ...
What greater glory could a man desire?
Siegfried Sassoon
Posted by ceegee at 2:58:00 pm

Email ThisBlogThis!Share to TwitterShare to FacebookShare to Pinterest
Labels: 1915 Lord_Derby