On 29th June this year I posted a blog on the opening of Crookes Valley Methodist Church and mentioned how the building had been allowed to deteriorate prior to its conversion to the student apartments. 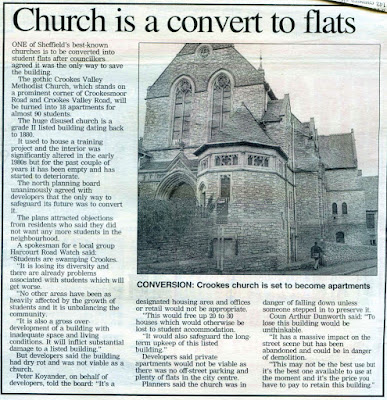 What I did not realise was that there was widespread local opposition to the application and that Sheffield City Council hardly passed a ringing endorsement of the plans. No-one could come up with any viable alternative for this marvelous building and so student flats and apartments it became A DECADE LATER.

It is a long and sorry saga that reflects badly on all those concerned but I suppose the fabric of the building was retained. But it is a mystery to me why so many glorious buildings are allowed to literally fall to bits before something is done. Surely the Methodist church should have least ensured that the dry rot should never have taken hold in the way that it did.