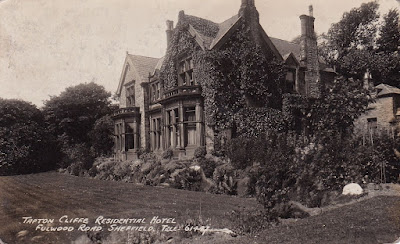 When I checked I found that the residence is now up for sale at a mere £1.75 million. This agents who are dealing with the sale gave a brief history of the property

"History Tapton Cliffe was constructed around 1864 by JohnYeomans Cowlishaw, a well-known Sheffield Cutler. The house was occupied as a private residence until 1920 when The University of Sheffield purchased the building as a hall for female students and this use continued until 1934 when Tapton Cliffe was converted to a residential hotel.

In 1948 the property was sold to the Secretary of State for Social Services and became the Royal Infirmary Sisters’ Home until 1963. The property remained in the ownership of United Sheffield Hospitals and NHS until 1985 when Tapton Cliffe became a private nursing home turning to Tapton Cliffe Clinic in 1990. Since 1995 the building has been occupied by Guide Dogs for the Blind Association and Blind Veterans UK."

The sale in 1895 of Tapton Cliffe would be approximately £530,00 at today's prices which gives a good indication of how property prices in the last 120 years have outstripped inflation
Posted by ceegee at 2:59:00 pm