It announced that the marriage of  Bernard James Sanby and Margareitta Annie Howitt at St. John's Church, Sandiway, Cheshire was the first to be held in the newly-built church. The church is still going strong today 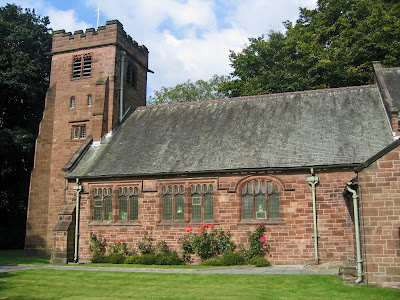 The first wedding to take place in the new St. John's Church, Sandiway, Cheshire, was that I celebrated on Tuesday of Mr. Bernard J. Sanby, of Northfield, Knutsford, a well-known Manchester merchant, and Margareitta Annie, second daughter of Mr. J, J. Howitt, of Rosslyn, Cuddington. Fully one hundred guests accepted invitations to the ceremony, which was performed by the Rev. J. Edwards, vicar of Christ Church, Blackpool.

SANBY is my grans maiden name and over the years I have researched the surname. They all originate from the area known as South Lincolnshire and West Norfolk. Bernard's great grandfather James Sanby was born in Thurlby, Lincs in 1769 and died in Holbeach in 1848. My great (x4) grandfather Joseph Sanby was christened in Holbeach in 1776. There is a link between these "branches" but to date I have been unable to confirm it.

Within a year the couple had a daughter Kathleen Ewan SANBY

BIRTHS. SANBY On the 31st March at Northfield, Knutsford the wife of Bernard J. Sanby, of a daughter.

Bernard re-married three years later. The name of the bride was Margery Yates
Posted by ceegee at 9:13:00 am