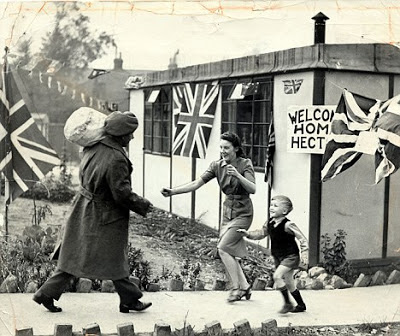 " I recently stumbled across your blog on the photo concerning Hector Murdoch returning home after World War 2 and you wondered what became of the people in the photo.

I am married to John's daughter (the boy in the photograph) and can happily tell you that John is still alive and well and living here in Cumbria since about 1974 along with his wife.

My wife can't really remember her grandfather Hector as he died when she was very young but used to go in school holidays to visit her nanny Rose in Norfolk until she died when my wife was around
18 which was in 1989.

John was also five years of age in the photo and not nine as stated in the blog.

In my defence the information regarding John's age came from a newspaper caption. I thought at the time he looked younger than nine years old but I believed what the newspaper said. You never learn!