The marriage of Hector and Rosina led to one of the most famous photographs to have come out of the Second World War. And is certainly in my opinion one of the finest ever taken 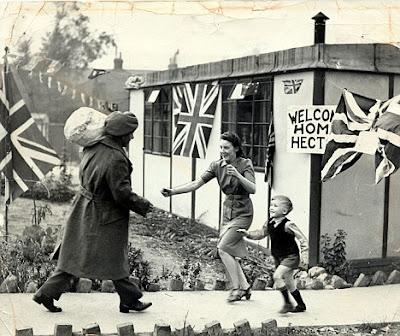 Gunner Hector Murdoch arrives at his new prefabricated house in Tulse Hill, London, — on his birthday no less - and is greeted by his wife Rosina and 9 year old son John. He has been away for four and a half years, three and a half years of which he was a prisoner of the Japanese after the fall of Singapore in 1942.

"They are virtually airborne with joy as they charge down the garden path to greet him".

There was nothing staged about this photograph which was taken by Harry Todd. Hector nearly died of cholera in Singapore. For 18 months, Rosina had no idea if he was alive or dead. Yet here, a new age dawns before them all, just as it did for a whole generation.

I wonder what happened to Hector, Rosina and John - the new prefabriacted house in Tulse Hill is no longer there. They were built to last for ten years but in some parts of the country a few have survived to this day. Ah the UK's post war housing policy!
Posted by ceegee at 10:10:00 am