"Something Must be Done"

One of the best photos ever taken is that of the Duke of Windsor visiting South Wales in the 1930's and being introduced to unemployed Welsh miners. 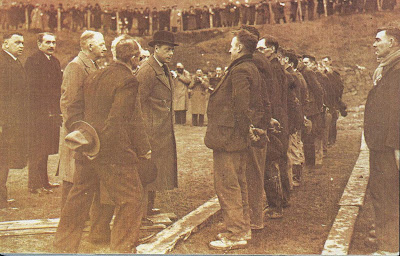 I can never understand why the miners look as though they are "on parade" and for the life of me, what are the row of wooden planks there for? It looks as though they have flattened t'tip especially for his visit. The other thing to note is that the Duke is the only person there wearing a hat. All the flat caps
belonging to the miners are held behind their backs. Very strange! Anyway after viewing the grinding poverty and hopelessness in the Valley,s the Duke was heard to say "Something must be done". Unfortunately he did not elaborate on this observation and in the light of that, nothing was done.
However this lack of action must have bothered him. A few years after the visit, a now hatless Duke and his new wife were introduced to 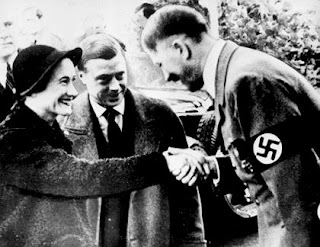 There is no record of the Duke asking his host to "do something" but within two years "something" did happen and the Valleys returned to full employment.
Posted by ceegee at 1:27:00 pm