Lightbrown is not a common name in Sheffield  - this is the entry in the 1911 Census for margaret
Name     Margaret Lightbrown
Relationship to Head of Household     Wife
Condition     Married
Gender     F
Age     30
Estimated Year of Birth     1881
Employed     N
Working at Home     N
Place of Birth     Lancashire Burnley
Enumerator Information
Address     206 Firth Park Road Sheffield
Parish     Sheffield
Town     Sheffield
Type of Building     Private House
Number of Rooms     6
Inhabited     Y
Reference     RG14PN27955 RG78PN1598 RD510 SD5 ED32 SN14
Administrative County     Yorkshire (West Riding)
Registration District     Sheffield Registration Sub District     West Brightside
Enumeration District     32
According to the census Margaret had been married less than a year to her husband James Edward Lightbrown, a 34 year old manager of a joiner's shop in a steelworks. Both originated from Lancashire, James from Accrington and Margaret from Burnley.
I know nothing else about their lives together after this point. But neither would have envisaged that Margaret would have ended her days in misery and turmoil.
The Manchester Guardian dated 19th March 1958 reported 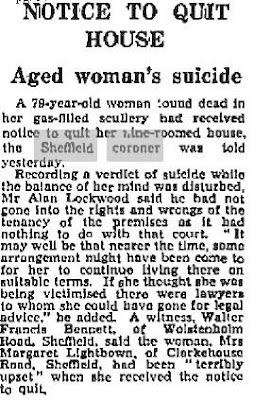 I have come across the coroner Mr Alan Lockwood before in connection with the deaths of the Derbyshire family in 1945 and I was not very impressed with his demeanour and attitude then, and this inquest has into Margaret's death merely confirms that impressison. He was correct in his assertion that the tennancy agreeement was not within the remit of the court, but his comments with regards to a possible "future" resolution, and Mrs Lightbrown's right to consult lawyers are both vacuous and meaningless. Margaret was 79 years of age when the notice of eviction was served - did she have the wherewithal, or more importantly from the lawyers perspective, the money to contest the notice - I very much doubt it.
"It may well be that nearer the time (for the eviction) some arrangement  might have been come to for her to continue living there on suitable terms". By far the more likely scenerio given the greed and avarice inherent in private landlords, is that Margaret would have been turfed out of her home. She had received "Notice to Quit" end of story, a notice that led to her be terribly upset". So upset in fact that she killed herself in a tragic manner
.
As a final note for younger readers - prior to the 1960s most domestic gas supply in the United Kingdom was coal gas aka town gas, which in its unburned form contained high levels of carbon monoxide. Carbon monoxide poisoning by intentionally inhaling coal gas was a common suicide method, accounting for nearly half of all suicides in the UK in the late 1950s. After the British government phased out coal gas in favor of natural gas (which lacks carbon monoxide) in the 1960s, the suicide rate in Britain fell by almost a third and has not risen since.
Posted by ceegee at 12:16:00 pm