I came across this newspaper report from the Sheffield and Rotherham Independent dated 24th July 1869. It related to the suicide of a young soldier named JAMES SOREY at the Hillsborough Barracks in Sheffield 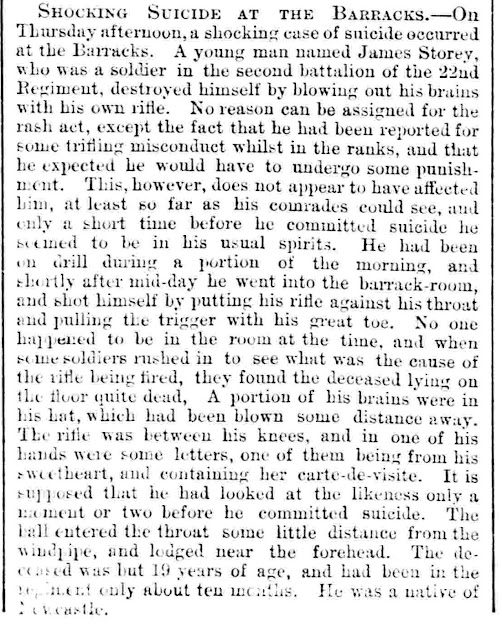 It was a tragic event but what I find the most remarkable is the report itself. Whoever posted the report had detailed knowledge of both the events that led up to his death, and the death itself. It is also noticeable for the graphic and grisly nature of the prose

"A portion of his brains were in his hat, which had been blown some distance away"

The newspaper reports of the time were littered with articles similar to this. The cynical part of me thinks that it was a way of selling more newspapers but another part thinks that they also reinforced the norms of the time. Suicide was unlawful and the church took a hostile view of those persons who disposed of themselves in such a manner,

The article states that James "destroyed himself" in a "shocking case of suicide" "No reason can be assigned for this rash act.." Sympathy was in short supply!

James was buried at St Philips Church on 24th July 1869 age 19 years old. The burial record gives his name as THOMAS STOREY rather than the JAMES STOREY of the article.