I posted an article to the site a few years ago relating to the Phoenix Theatre in Sheffield.

Last week a reader of this article contacted me with information that related to his late grandfather, and his appearance at the Phoenix in 1924

"My grandfather, Albert Emmanuel Nicholson was a member of ‘The Strolling Players’ theatre group who appeared at The Phoenix Theatre, Hillsborough and other local venues in the 1920s. The attached poster from I believe 1924 lists him under his stage name of ‘Bert Nichols, Light Comedian’. He lived at that time with his family in Minto Road (where I also lived up until three-years old) opposite Hillsborough Park and worked as a manager with the Brightside & Carbrook Co-operative Association. Interestingly, along with the poster I also have a photograph of The Strolling Players together with a letter to him from the BBC requesting details of fees for The Players to perform.

A lovely well-liked man he was also an active local lay-preacher. I also recall that he was aboard for the very last cruise of the original Queen Elizabeth Cunard liner in 1968. He passed away in 1977 aged 85 and is most-fondly remembered" 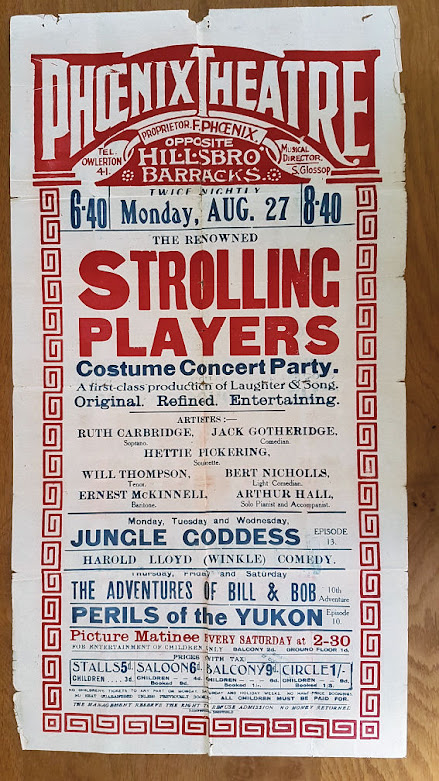 He also kindly supplied me with a scan of the poster that advertised the show.