This report appeared in the local press dated 17th October 1916 and related to a case that was conducted the previous day at Sheffield's Police Court. 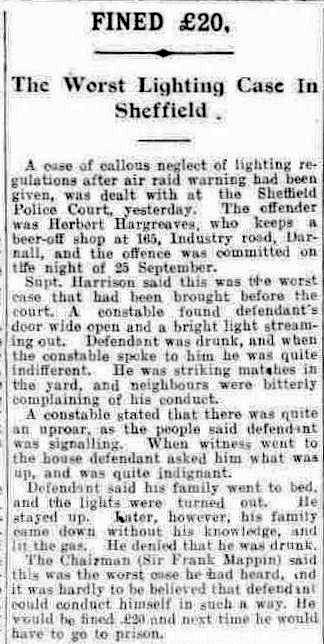 The Chairman of the bench was Sir Frank Mappin, one of Sheffield's most prominent industrialists and from his comnents he was clearly incensed by the conduct of Herbert Hargreaves on the night of 25th September 1916. The fine of £20 is the equivalent of over £1200 in todays money which is nothing short of draconian. The usual fine for a breach of the regulations was between 10s and £1

But Sir Frank had every right to be incensed because Hargreaves flagrant disregard of the blackout regulations occurred on the night of Sheffield's first ever air-raid, a raid that led to the loss of 29 lives.It is no wonder that his neighbours were bitterly complaining about his conduct and some even accused him of signalling to the enemy.