Sheffield loses another of her sturdy citizens 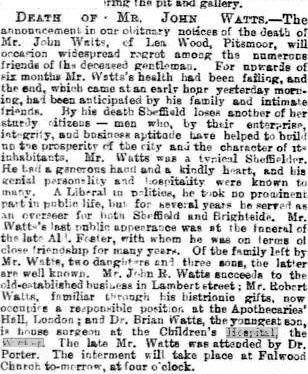 I came across this obituary the other month dated 23rd July 1895 for a Mr John Watts, What struck me was the language employed by the writer
"Sheffield loses another of her sturdy citizens - men who by their enterprise, integrity and business aptitude have helped to build up the prosperity of the city and the character of its inhabitants. Mr Watts was a typical Sheffielder. He had a generous hand and a kindly heart, and his genial personality and hospitality were known to many"  .
The language bears a strong resemblance to that being uttered by members of the Coalition government, In fact their "growth strategy" is based around enterprise, integrity and business acumen, The only problem is that this type of person has been on the "endangered species" for many years. In fact you can argue he is heading for extinction. (as is the "typical Sheffielder" mentioned in the article).
According to the writer, it was people like John Watts who helped to build the prosperity of the city and the character of its inhabitants.but these are just a few of the incidents that were taking place in Sheffield towards the end of John's life