After a lot of prevaracation on my part, I have eventually decided to subscribe for access to the 1911 Census. I have strong feelings about public-governement bodies charging for information and material that was provided freely by our ancestors. They never received any payment for the information, and neither have their descendents, and so why should the state profit!. They will of course point to the various costs involved but these costs have been more that recouped by the value of the information they have received.
Anyway I digress. When you are researching any census you are struck by the stories that lay behind the document. Take for instance the Tyler family. They are living for want of a better term in a two room back to back hovel in the heavily industrialised east end of Sheffield. The details are as follows 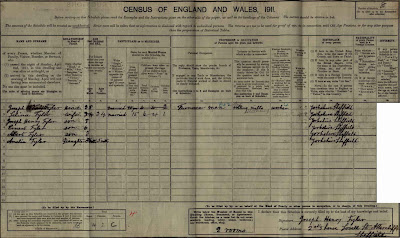 The census was taken on 2nd April 1911 but if anyone had told them that before the next five and a half years are up, they would be all killed by a bomb dropped by a German Zeppelin, they would have just looked at you with sheer incredulity. And yet that is exactly what happened. On 25th September 1916 the Tyler family now living in nearby Corby Street were wiped out by a bomb dropped by a Zeppelin
"In Corby Street (now Fred Mulley Road) a high explosive bomb demolished No 142 killing Selina (41) and Joseph Tyler (45) and their five children Joseph Henry (14),Ernest (11), Albert (8), Amelia (5) and John (2). The same bomb also killed 11 year old Richard Brewington of 134 Corby Street and fatally injured Martha Shakespeare of 143 Corby Street, who died later in the day in the Royal Infirmary, Infirmary Road".

It makes you reflect that no-one knows what life has got in store for them - never in a million years would the Tylers have thought in 1911 that they would all die together in an explosion the likes of which Sheffield had never seen before.