It has been a rough week on the Hill. On Wednesday it was the funeral of my dear mother in law Mary who sadly passed away on 23rd April 2015 at the age of 87. Mary was the last of the Simpson family to die and so her passing represents the end of an era. We will miss her.

And then yesterday the Hill witnessed another dreadful second half display by the Blades in the League One Play-Offs. And then to cap it all the Party of the Toffs, despite all predictions, are set to govern my life for the next five years. 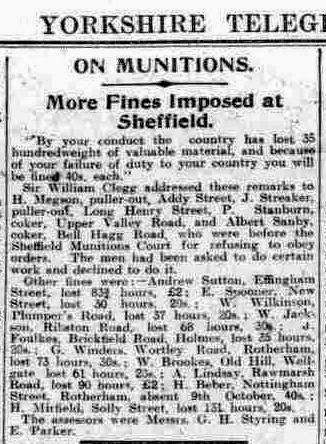 Sir William obviously took a dim view of the workers conduct and fined them the equivalent of £185 in today's money which seems rather punitive to say the least. But on the plus side at least Albert was not in France serving in the British Army. If he had refused orders there he would have in all probability been court-martialed and then executed

This has not been the best week in my life!