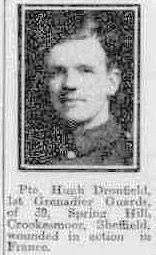 The recipient of the wound Hugh Dronfield lived in the house next to ours one hundred years ago. He did recover from the wounds he received and returned to the Western Front. Less than a year later the same photograph appeared in the local newspaper (14th October 1916) - Hugh had been wounded for a second time!

It is believed that Hugh transferred to the RE in mid 1916 - first to the Waterways/ Railways section of the RE and then to the Light Railways section shortly afterwards which may account for the two RE numbers less than three thousand apart. It was, however, definitely before February 1917.

His next door nieghbour in Spring Hill Billie Thomas did not return from the war. He was killed on 7thOctober 1916 and is honoured on the Thiepval Memorial