In the course of writing about the UNDY family I came across a reference to a "street war memorial". The memorial in question was on what was Dophin Street in the Darnall district of Sheffield. This was the home in in 1884 of the UNDY family 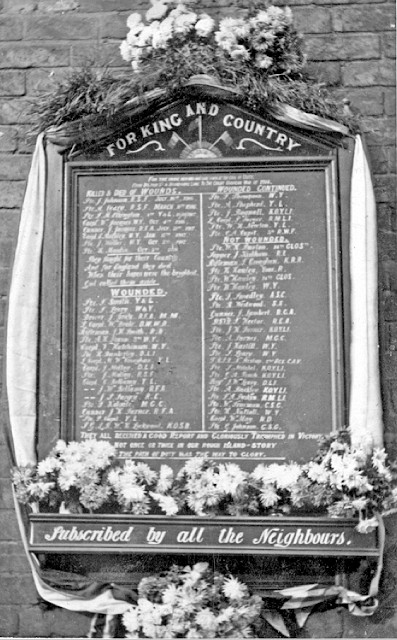 Dean and Stuart on their excellent Sheffield Soldiers of the First World War site give further details of the memorial. In fact Dean reckons that this "street shrine" was the only one of its kind in Sheffield.

INSCRIPTION AT THE BOTTOM OF THE MEMORIAL READS:
THEY ALL RECEIVED A GOOD REPORT AND GLORIOUS TRIUMPHED IN VICTORY NOT ONCE OR TWICE IN OUR ROUGH ISLANDS- STORY THE PATH OF DUTY WAS THE WAY TO GLORY

Out of the 48 houses in Dolphin Street 55 served their country in the Great War. And ou of those 55, seven lost their lives and one was posted missing

One of the residents of the street a Mrs Bagnall inaugorated the memorial and roll of honour. and with the aid of neighbours and without ANY assistance from outside sources, erected a shrine to those that served their country