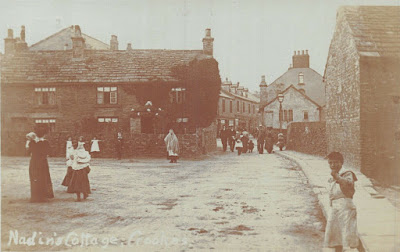 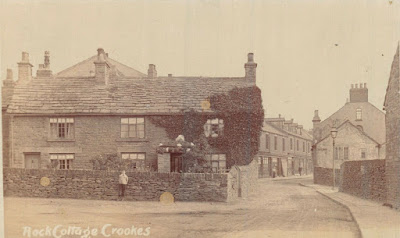 The postcards were clearly taken at different times and from a different perspective - the first is more distant and shows the wall of the building to the right in its entirety. And is also features a lot more Crookes residents.

But the main difference is in the title of the postcards - Rock Cottage and Nadin Cottage Crookes. Picture Sheffield does have copyrighted photographs of Rock Cottage and states that the Cottage was demolished in October 1904. So these cards predate 1904

It was situated just before the left hand turn into Toyne Street which still exists. The Cottage would have stood in the middle of  the main road in Crookes

The other point to note is that both cards shows on the right the chimneys of the old Punch Bowl public house. This photograph was taken circa 1920