Talk about co-incidence. Yesterday I came across this old cutting from the Sheffield Telegraph dated Friday 19th October 2007. The article voices grave concern over the fabric of building that had not been used since 1996.
In fact this Grade 2 listed building was placed on the Victorian Society's list of most at-risk buildings in the UK that year. 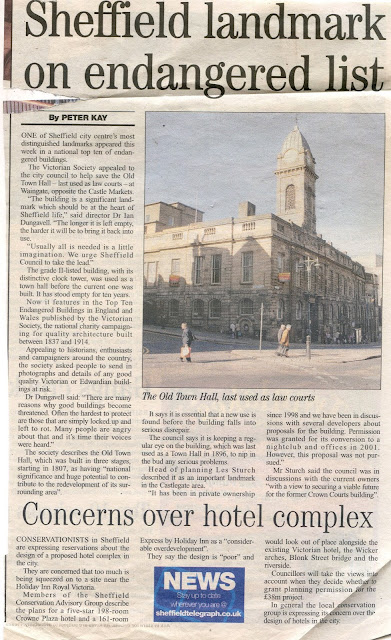 But sadly this fine historic building (Sheffield does not have too many of them) was left in the hands of private sector developers who proceeded oversee a further marked deterioration in the fabric of the building. Sheffield City Council who sold the building to the private sector kept a serious eye on the  increasingly dilapidated "landmark" building but that was about the extent of it.

There were talks, consultations, studies you name it but the building remained unoccupied until yesterday when it was announced that plans have been approved to redevelop the former courthouse in Sheffield and create "pod" hotel rooms and apartments. Sheffield City Council planners have said the building can be developed while "preserving it as much as possible".

I think the last statement remains to be seen. Sheffield does not have a particularly good record when it comes to restoring historic buildings in a sympathetic and meaningful fashion!