I have just posted a full report of the committal proceedings for Rose Artcliff who was arrested and charged for the murder of a nurse, Ada Bradley in April 1923.

The detailed report of the tragedy and its aftermath appeared in the Sheffield Daily Telegraph dated 19th April 1923 and occupied nearly two full columns in the newspaper.

At the end of the report which at times was rather gruesome, was another report of a funeral that took place the day before at Sheffield's City Road Cemetery 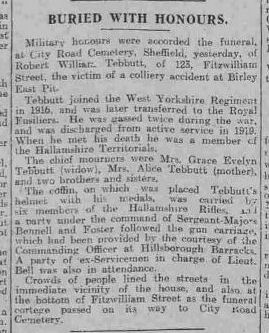 It was for a Robert William Tebbutt who died at Birley East Pit in an accident earlier that month. Robert was only 24 when he died but he was awarded full military honours which seems to indicate that he was held in high esteem. At the time of his death he was a member of the Hallamshire Territorials.

From the report it looks as though Robert did not have much luck in life - gassed twice in the Great War, and then killed in a pit accident four years after his discharge,

His burial record is as follows