One of the articles on the site relates to the life of the Rev. Arthur Procter who served his country in the Great War and was awarded the Victoria Cross for his brave actions on 4th June 2016. Arthur has the distinction of being the first British soldier to be decorated with the Victoria Cross on the battlefield.

I have just received this e-mail from a researcher who kindly sent me a copy of  the 1/5th Battalion, the King's (Liverpool) Regiment; Territorial Forces. War Dairy that details the actions that led to the award

I came across the original description of Arthur Proctor’s deeds of June 1916 when I was researching my grandfather’s war service in the 5th Battalion of the Kings Liverpool. William Clarke was Sergeant Major & was awarded the Military Cross, gazetted in January 1917. I haven’t yet found a description of the action that led to his award. 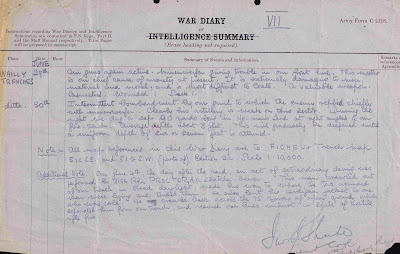 If anyone has any further information on Sergeant Major William Clarke MC - 5th Battalion of the Kings Liverpool please contact me and I will forward it to his grandson
Posted by ceegee at 3:33:00 pm