I came across this print  - I bought it quite a few years back and then "misplaced" it. 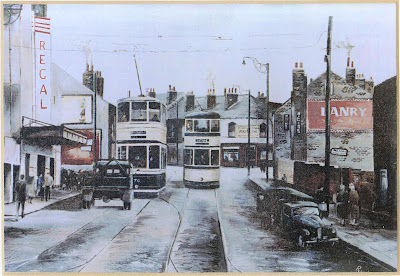 It shows the Regal Cinema on Staniforth Road Darnall Sheffield. There is a brief history of the cinema on the Cinema Treaures site. But its history goes back a bit further to the late nineteenth century.

Theatre Royal Staniforth Road
Opened: as the People's Theatre, Attercliffe on the 26-12-1896,being renamed the Theatre Royal, Attercliffe on the 13-12-1897. The Theatre Royal Attercliffe mainly operated as a cinema from the 9-2-1907.
Architect: Flockton Gibbs and Flockton
Capacity: 1100 (1904); 950 (1923)
Proprietors: 1904 North of England Theatre Corporation, a Frank MacNaghten s company
1908 it was reconstructed as the North of England Theatres Ltd;
1923 MacNaghten's Vaudeville Circuit Ltd., but leased to the manager Wilfrid Bryan.
Closed: 17-6-33
Subsequent use. The theatre was reconstructed as a cinema (see under Regal)
NOTES Wilfrid Bryan recollected in 1926 that pictures were first shown in 1904 and, while quite possible in the summer months confirmation is lacking in contemporary reports; films were certainly shown from 25-6-06 and throughout the summer month of 1906. In the autumn film weeks were interspersed with drama, vaudeville and musical plays, but from February 1907 the hall mainly operated as a cinema.

"The Regal Cinema stood on Staniforth Road in the Attercliffe district of Sheffield on the eastern edge of the city. It was a rebuild of the former Theatre Royal and occupied the same site, with some of the original external walls retained in the new build. The architect was Harold J. Shepherd and building contractors were George Longden and Son Ltd. The Regal Cinema was opened on Monday 14th October 1935 with the film “The Dictator” starring Clive Brooke and Madeleine Carroll.
REGAL. Staniforth Road, Attercliffe Opened: 14-10-35 (Built on the site of the Theatre Royal) Architect: Harold J Shepherd Capacity: 918
Proprietors: Regal Attercliffe Ltd. ; from January 1936 leased to J F Emery Circuit.; from March 1955 Star Cinemas Closed: 27-5-61
Subsequent use: Bingo and then demolished and site redeveloped for shopping
NOTES
The new cinema retained some of the external walls of the Theatre Royal but the reconstruction involved considerable rebuilding. The Regal was damaged on the second night of the Sheffield 'blitz' and did not reopen until the 10-3-1941
Posted by ceegee at 3:32:00 pm