I have finally posted a full article to the site relating to the Cater family of Canal Street Sheffield. The father and mother John and Mary Cater (nee Brown) married in the summer of 1881 and by the time of the 1911 Census, thirty years later, they had sixteen children, nine of which had died.

Unfortunately I could not find a photograph or illustration of Canal Street as it was at the turn of the C20th. And as I said in the article I would have been interested to ascertain the cause of death for the other eight children but the current cost of ordering death certificates from the General Record Office is very prohibitive
Posted by ceegee at 3:33:00 pm No comments:

A reader of the site came across an article that I posted many years ago. It recalled the death of Isaac Hornsey in June 1900 who was overcome by ammonia fumes at the brewery and died as a result. This additional information in many ways compliments the article. A big thanks to the reader! 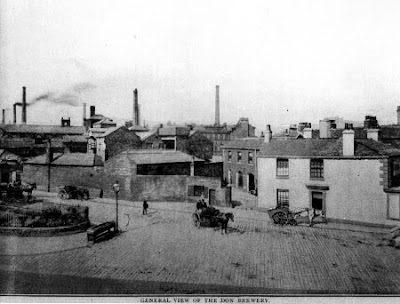 I note your website has a piece on the now-demolished Don Brewery which stood at the corner of Penistone Rd/Green Lane/Shalesmoor. I know your focus is the 1900 Death by Ammonia Fumes story. However, you might find the information below useful or at least interesting.

Found this on the man who made the machine that killed Isaac Hornsey at the Don Brewery: It is from the excellent Graces Guide to British Industrial History

Samuel Puplett was born in Stockport in 1845 and educated at Ackworth School, Yorkshire, Samuel Puplett was a mechanical engineer who set up a business in Birmingham manufacturing ice-making and refrigeration machines. In 1878 he made his first ammonia compression ice machine, in which branch of refrigeration he subsequently specialised, opening offices in Westminster in 1891. He died in 1923, his obituary stating that “it was a source of pride to him that no fatal accident had occurred with any of [his machines]”.

He had clearly forgotten about Isaac Hornsey!
Posted by ceegee at 2:34:00 pm No comments:

Many years ago I posted an article regarding the events of 25th September 1916 when a lone German Zeppelin bombed the Pitsmoor and Burngreave districts of Sheffield resulting in 29 civilian fatalities, nineteen injuries and 89 properties that were seriously damaged. 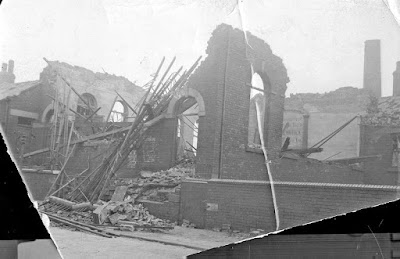 The chapel was never re-built but the congregation continued to conduct services untl Boxing Day 1926.

Nearly ten years after the Zeppelin attack another notable event occurred in the same street. The murder of William Francis Plommer took place in Princess Street on 27 April 1925. Plommer,was attacked in the street by a gang and died of his injuries shortly afterwards. Eleven men were placed under arrest in the aftermath of the murder,and five of them were convicted. Two of those convicted, the brothers Lawrence Fowler and Wilfred Fowler, were hanged in Armley Goal for this murder. It marked the begining of the end for the Sheffield gangs