Sgt Boardman and The Red Baron

This entry is really what the Blog is all about. I have had an article on my site for a number of years about those civilians who died in the Second World War as a result of German bombing in the Pitsmoor district of Sheffield. It was heavily bombed the night of Dec 12-13th 1940, and the casualities and damage were some of  the worst the city experienced

A few of the descendents of those killed that night have contacted me, and one in particular had a unusual twist to it. The first mail I received was from Neil in Ontario Canada last month - November 2010

"Hi , my name is  Neil Noble and the Neales were my grandparents. My mother Dorothy Edna Neale was born Aug 27 1937, she told me was sick and was not allowed near her younger brother Tony ,and was at her Aunts on the night of Dec 12 1940. Eventually she was adopted by her aunt who she assumed was her  mum until they told her differently when she was 16. Her dads family wanted her and her mothers sister adopted her.  Caused all kinds of problems !! Anyway she lost her mum , dad, brother and her granma's family all in a short space of time. She decided to name me Neil to remember the family name , all be it slightly different"

In subsequent mails I answered the best I could some questions Neil had raised regarding the Sheffield Blitz,during which he disclosed that he and his family had emigrated to Canada from Manchester in the mid seventies.

Back in 1976 when I was 14 my family emigrated from Manchester England to Canada. I was only allowed to bring what I could get into my one suit case. I had to down size! I had a bomb sight from a Lancaster bomber that was fairly big. I swapped this to a friend (Colin Boardman) from school (Littlemoss Boys Secondary) that had also gotten me interested in the Air Cadets (430 Sqd. Droylsden ) for an artillery case. Not just any old one but one that was engraved by his granddad. Engraved by a bayonet “Sgt Boardman
Somme 1916” and it has a brass R.A.C button soldered to the front of it. > (The R.A.F. prior to 1918 were the R.A.C.)

Now the story I was told by Colin and his brother Kevin was that their granddad had been shot down by “ The Red Barron” after which he made it to the allied trenches. Here he made this piece of trench art with a button from his ruined uniform and an artillary case he got from the French who were in the trenches.
I have been trying to find the family to give this back too. Any ideas? "

A second mail had corrections - "The button has no letters on it just a crown with a bird flying below it. After trying to find the Boardmans for several years I decided that maybe I could find them by tacking their granddad, Sgt. Boardman, It was my mistake calling the button a "R.A.C" button. I did mean R.F.C. Other markings on the Case 37-85 P.D.P.s 85 1.17 and what looks like a little bomb."

Any way I placed the information Derek provided on the excellent Great War Forum and to date I've had two responses!

http://1914-1918.invisionzone.com/forums/index.php?showtopic=157255
which sort of confirm my initial reservations about young Colin Boardman's story.


Any further information would be welcome

In Memory of
C G HOBBS
Private
37841
1st Bn., Hampshire Regiment
who died on
Monday, 4th November 1918. Age 28.
Commemorative Information
I know nothing about him or the circumstances of his death but have reflected on the fact that he died just seven days before the war ended. I wonder what life he would have had if he had survived?
Posted by ceegee at 2:43:00 pm No comments: 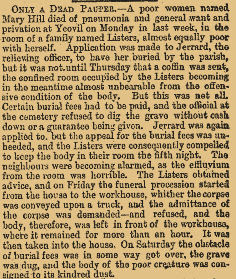 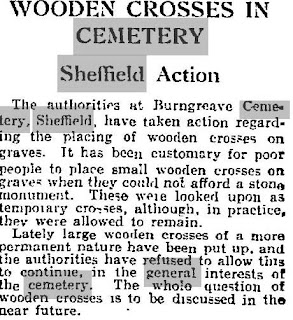 The authorities at the Cemetery obviously saw the installation of wooden crosses by poor people as being prejudicial to the general interests of the cemetery and took corrective action by refusing to allow the practice to continue. I am hazarding a guess that the "authorities" are revealing class prejudices in their actions, but hounding the poor after their death is taking it a bit too far,
Posted by ceegee at 4:01:00 pm No comments:

"There won't be mail in Crookes this Xmas..."


I just realised last night that we have not received a mail delivery for over a week. In fact we have not seen a postman anywhere on the Hill. Whilst I acknowledge that conditions were a little grim towards the end of  last week, it is now six days since we last had significant snowfall but still no sign of the Royal Mail, or any explanation of what the current situation is. It is though they have packed up their mailbags and gone home .

Given that the Royal Mail is a UK monopoly for standard mail there is nothing I can do about it. As I understand it Royal Mail is technically still owned by the government, (it owns 100% of the shares) but it has "devolved" the day to day running of the company to its management. What is apparent is that under this arrangement the postal service has deteriorated markedly in the last few years and the "owners" of the business i.e. the government, are not showing any concern whatsoever.

In fact the ill-fated Labour governments headed by Blair and Brown were instrumental in ensuring that the UK postal service ceased to be a public service and became just another business where the "chosen few" can make a few bob when it is eventually privatised. Public service is no longer an option
Posted by ceegee at 11:45:00 am No comments:

The view from the hill is a trifle obscured this morning as we have had the first real snowfall of the winter in Sheffield. According to the "forecasts" we were to expect heavy snowfalls throughout the night, but 1-2 inch of snow hardly constitutes  a heavy snowfall. Still more is "forecast" and so there is still a chance.

I have just finished reading The Silent State: Secrets, Surveillance and the Myth of British Democracy by Heather Brooke  - "The most important and entertaining political book you’ll read this year, by the journalist who exposed the MPs' expenses and changed C21st Britain"

I thought the book was a bit patchy in parts, but was enlightening. The chapter on the UK's judicial system made for some pretty grim reading. Many of the articles on my website rely quite heavily on the newspaper reports of the time. Many of these reports are both detailed and informative - in some cases they are basically verbatim accounts of events and testimony. We as a society owe a huge debt to the unamed journalists (and printers) who filed these stories for future posterity.

Sadly over the last twenty to thirty years the standard of reporting has plumetted. Nowadays in all types of media we tend to get a brief summary of events, and a lot of comment, opinion and analysis.And in many cases, information is either "amended" or witheld from the public on a variety of spurious grounds. How anyone can form sound opinions without accurate and detailed information is a mystery to me. But that is Britain in the C21st - give the public inadequate and inaccurate information and you are going to get  inadequate and inaccurate opinion.
Posted by ceegee at 9:38:00 am No comments:

Email ThisBlogThis!Share to TwitterShare to FacebookShare to Pinterest
Labels: The Silent State

A Greater View from The Hill

I've just spent a bit of time updated the article about war graves in Walkley Cemetery. According to the Commonwealth War Graves Commission there are 44 graves in the Cemetery, and so I'm still got a few to trace.
http://www.chrishobbs.com/sheffield/walkleycemeterywardead.htm

On a different matter last night as I walked out of the house for a couple of pints down the road, I was surprised to find that the "View From A Hill" was a bit clearer, The reason for this greater clarity was that local Council workers, no doubt on the orders of superiors, had hacked the main spar of my magnolia.off and tossed it  back into my garden.

First of all I admit that the Council were acting totally in accordance with the law - it is right that they take robust action on overhanging branches that threaten seven foot tall people. But it is the way that they conducted themselves that leaves the usual bitter taste. Totally arbitrary with no notification at all to the householder - they just came, hacked a branch off, tossed it into the garden and left.

The spar had been there many years and never caused any problems and was really nice in spring when it flowered. The tree itself is over thirty years old, and a present from my mother. It does have a strong sentimental value. But to the Council none of this matters - they have decided that overhanging branches are a menace and are to be hacked off. And in hacking off the branch, they have hacked me off!!
Posted by ceegee at 3:14:00 pm No comments:

View From A Hill

It has expanded in that period, as I have added more and more articles that have a "Sheffield Connection". I am also always looking to add additional material/content to exsisting articles.

Until now I also really did not have a suitable mechanism for notifying readers of additions to the site, and commenting on these additions. This blog will hopefully rectify this shortcoming.

And I also want to comment on more general matters relating to Sheffield and its people and I hope that this blog will provide me with just such a platform.
Posted by ceegee at 12:53:00 pm 1 comment: