I have just posted an article to the site that is based on a brief report that appeared in the Sheffield Daily Independent dated 11th November 1914. The "deeply pathetic" story is an understatement. 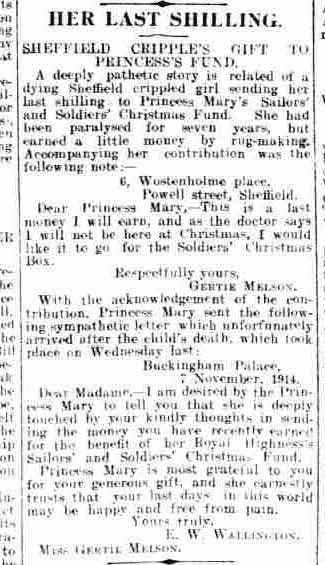 But when I researched the family, Gertey's death was just a forerunner of a greater tragedy that was to befall the family within the next year..

I have been unable to find a photograph or illustration of Powell Street where the family lived for so many years. I believe that they were back to back properties that may have been demolished in the early to mid Sixties

I came across this article in the Yorkshire Post dated Saturday 8th March 1941. It refers to the award of the George Medal to three civilians from Sheffield for their bravery on the nights of the Sheffield Blitz.

Unfortunately the report does not go into greater detail with regard to location etc but newspapers at the time were subject to strict censorship.

And yes PC Radford did get married to Miss Smith

The  following cutting is from The Manchester Guardian dated 2nd March 1927. The case itself was quite straightforward. The son Edwin Firth bludgeoned his father George Herbert Firth with a crowbar and then cut his throat with a razor. In the attack the razor was broken and so Edwin went upstairs, got another razor and cut his own throat.

But what is unusual is that when a doctor was called to the scene, he "declined" to attend. The Coroner said that "probably" the doctor was told they were both dead and that it was "useless to attend." This is just supposition on the Coroners part, but it appears that the doctor is not obliged to respond to any call. A worrying statement!

The other thing of note is that the son Edwin suffered in the past from Brain Fag, a term that I had never heard of until I read this report

The house where the tragedy occurred - 335 Psalter Lane no longer exists. It was demolished many years ago and was replaced by commercial buildings.

"I came across this newspaper report dated 22nd December 1893 which detailed a fire that occurred earlier the previous morning at the premises of  Messrs. G. R. Hovey and Sons, Drapers and House Furnishers. The buildings were at the corner of Angel-street and Castle-street in Sheffield City Centre

One of the largest fires ever known at Sheffield broke out yesterday morning at the establishment of Messrs. G. R. Hovey and Sons, drapers and house furnishers, Angel-street and Castle-street. The caretaker saw that all was safe at 11 o'clock on Wednesday night. He, the housekeeper, and about 60 assistants slept on the premises. About 4 o'clock in the morning they were all awakened by shouts of " Fire," and, without dressing, simply throwing cloaks or rugs over themselves, they hurried from the building.

One young fellow, named Ralph Cole, was missed, but he was afterwards rescued by means of the fire-escape. Later on another male assistant, named Victor Parsons, of Sheffield, was missed. He was seen running along the corridor in the upper-storey at the time the alarm was given, and was also noticed knocking at the doors of the assistants in order to awaken them. From that moment he was not seen again, and it is believed that he was overcome by the smoke and perished in the flames.

The fire spread with alarming rapidity. Piles of masonry commenced to fall, and in a very short time the premises were completely gutted. Several adjoining blocks of buildings were destroyed, and others were greatly damaged, including the Imperial Hotel, on the opposite side of the street. The flames could be seen for many miles. The fire was not put out until late in the afternoon, and last night the firemen were still watching to prevent fresh outbreaks amongst the great mass of smouldering ruins. Six business establishments were completely gutted and 12 other shops extensively damaged. The cause of the fire is unknown, but it is beyond doubt that it originated in the basement or on the ground floor of Messrs. Hovey's shops. Messrs. Hovey and Sons estimate the damage to their premises, stock, and buildings at about £80,000, and, with the amounts estimated by the owners of the adjoining property damaged, the total loss sustained is put down at nearly a quarter of a million."

The following day 23rd December, 1893 another report appeared giving readers an update on the aftermath of the fire

Fire at Messrs. Hovey’s Sheffield
Progress of the Work

The  work  of  clearing away the debris from the scene of the fire at  Messrs. Hovey's premises  in  Angel  street, and Castle street, is being carried out today with as much despatch as possible. The barriers preventing the public passing up and down Angel street were removed this morning, but  locomotion  in  Castle  street  is  still  prohibited.

Hoardings have been erected around the site of the destroyed building,and the firemen are  still  playing  on  the debris which continues to smoulder.  Early this morning, while the work was going on the men came  across  a tin box to one of the assistants, which contained  remains of clothing and other articles. No traces of  the missing assistant, Victor  Parsons,have yet been discovered, and it is now universally believed that  no further  light will be thrown upon his fate.

The relief fund inaugurated for assisting Messrs. Hovey’s employees has received substantial support,
and to-day each assistant has received the sum of £1 10s. out of the £56 odd in the hands of the treasurer and it is  intended to make further distributions as the subscription list  increases  The dangerous position of the gable wall between Messrs. Hovey's premises and the adjoining property still causes some anxiety, but its height is gradually being diminished by several  steeplejacks in the employ of Mr.W. E. Harrison, who are busily engaged  in knocking it down brick by brick, and although this piecemeal work isslow it is considered more safe than attempting to pull down the large pile as a whole. The crowds of  spectators passing along Angel street are greatly interested in this work, and it is a difficult matter to walk along the thoroughfares

At today's prices, the damage to Messrs. Hovey and Sons premises, stock, and buildings was estimated to be in excess of seven million pounds whilst the the owners of the adjoining properties sustained estimated in total losses of twenty-two million. So overall the total cost of the blaze was nearly thirty million pounds.

I came across this report in The Derbyshire Times dated Friday 29th September 1944 that details the bomb damage that North Derbyshire suffered between 1939 - 1944. I was amazed to discover that although the area did not receive a major attack, there was only one fatality and that occurred at Pinxton on August 12th 1940 when one bomb hit a council house causing one fatality.

Unfortunately I have not been able to find any other details relating to the incident. The church at Pinxton (St Helens) has 4 CWGC graves but all were service personnel when they died, There were no deaths in 1940.
Of course at the time strict censorship was imposed and the local newspapers would not have been able to report the incident
Posted by ceegee at 5:08:00 pm 2 comments:

A friend of mine sent me this 1911 Census form that they had come across. It was filled in by Mr John Crisp at his house at 75 Highton Street, Walkley Sheffield 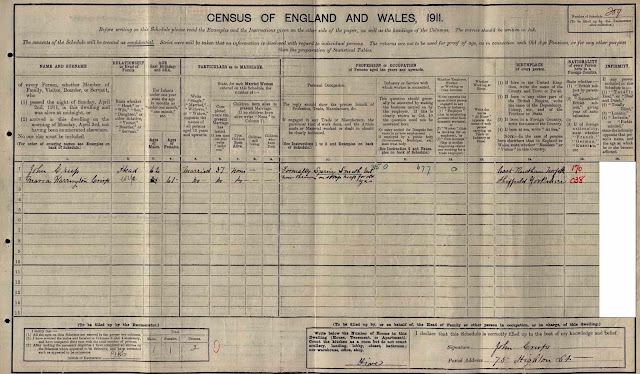 In the box marked "Occupation" he wrote "formerly Spring Smith but now thrown on the scrapheap for old age." He was 62 years old at the time.

I posted this information in Wed 21st March 2012 to the Blog and commented that his sentiments seem to have a modern-day ring about them - a case of nothing ever changes!.

This is his burial record

His wife Annie died in February 1932 age 82 and is buried with John. They had been married for 52 years which in the early C20th was very rare