George Brittain and his family - Walkley

Last Saturday 25th February I spent a few hours at the workday at Walkley Cemetery, removing brambles, undergrowth etc in a section of the cemetery that had burials from the 1940's and 50's. Whilst doing this I uncovered this headstone which I thought was a marvellous design. The inscription was also intriguing and so with a bit of spare time on my hands I did some research and uncovered a rather interesting story that I posted to the website 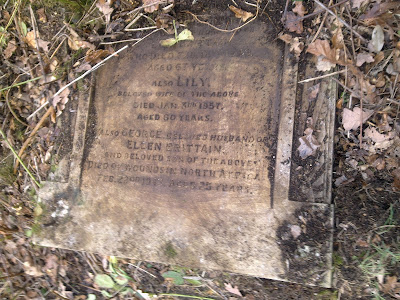 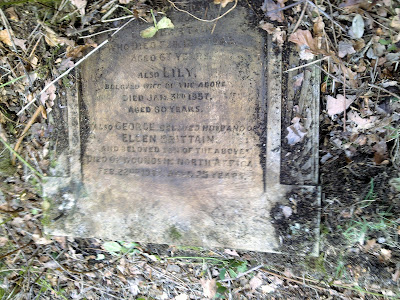 From The Sheffield and Rotherham Independent 28th August 1886

Nowadays if PC Porter had taken action like he did then, he would most likely receive a short prison sentence and be fired from the police force. And probably have to move house. Just goes to show, how times have changed
Posted by ceegee at 12:59:00 pm No comments:

A couple of days ago an old lag from the class of 65 contacted me. He was propping up the bar in the newly re-opened (yet again) Millhouses Hotel when he looked out of the pub window, and thought his dreams had come true at last, albeit 47 years too late.

Where once stood a mighty citadel of academic excellence and/or a blight  on the butt of post war education (cross out where applicable) there was only a pile of rubble.

He did not contact me straight away with this great news as he prefers supping beer (a common failing amongst the 65'ers)but he let me know once he'd come round. 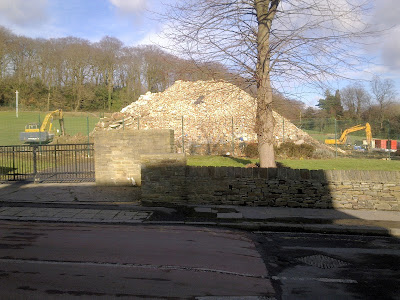 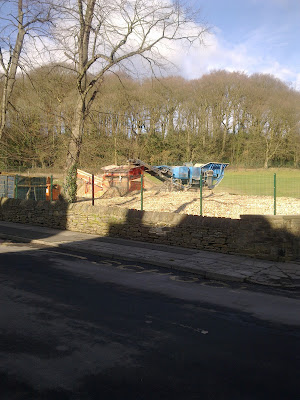 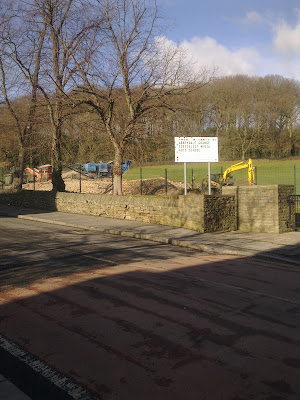 Whilst I sat on a wall in Hastings Road smoking a large cigar and laughing at the madness of Britain in the twenty-first century, I had "visions" which is worrying development at my time of life. The mountain of rubble that was once a bastion (I think that is the right word) of scholarly endeavour should be grassed over and at the top a sculpture/statue should be commissioned. For instance it could depict a local government officer closely clutching a bulging brown envelope or a group of mean spirited camel-coated property- developers lying prostrate at the feet of an impassive St Margaret of Thatcher or a old shabby florid-faced man filling his pipe with a pinch of ready-rub or a small bewildered schoolboy with a tear running down his face.
Posted by ceegee at 12:29:00 pm No comments:

As I look forward to an impoverished old age, I can only stand back and admire the perpetrators of the ever deepening moral abyss that bedevills much of Britain today. Whilst I have recently been duped out of my employers pension and received yet another insulting pay-rise for the nth year running, the leader of this unprovoked assault on my living standards has been lining his already deep pockets with yet more "spending loot". The fact that many of the low paid staff that he is supposed to represent are descending at an alarming rate into poverty and future misery, he and his ilk think that this descent should be rewarded by pay AND benefit awards that are bordering on the obscene. 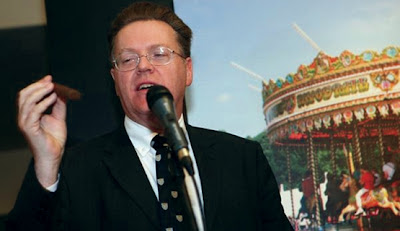 The Times Educational Supplement dated 2 Feb 2012 takes up the story.


"The vice-chancellor of the University of Sheffield received a bonus that increased his pay and pension package by almost 6 per cent to £311,000 last year, as the institution prepared to cut pensions for its lowest-paid staff.
Keith Burnett's 2010-11 award was condemned as "morally irresponsible" by the university's Unison branch, although his total package is still below the Russell Group average.
The rise came in a year when Professor Burnett, in his former role as chair of the Universities and Colleges Employers Association, negotiated a 0.4 per cent national pay rise that applied to the majority of the UK's higher education staff.
During 2010-11, Sheffield proposed closing its defined-benefit pension scheme for support staff and switching those on the lowest pay grades to a "cash-balance" scheme. It implemented the plans on 1 December amid continuing opposition from the Unison and Unite unions, which have mounted strikes against the changes.
The deficit in Sheffield's support staff pension scheme was £52.8 million at 31 July 2011, compared with £58.3 million a year earlier.
Unions say Sheffield's move - which closes the defined-benefit scheme to current as well as future staff - will halve the previous typical £7,500 annual pension for support staff earning £15,000 a year.
Professor Burnett's total package (up 5.8 per cent from £294,000 in 2009-10) comprised £267,000 salary, £4,000 of benefits in kind and £40,000 in employer pension contributions, Sheffield's recently published accounts reveal.
A Sheffield spokesman said that Professor Burnett "is a leading vice-chancellor" and his total remuneration package is in the "mid range" compared with his peers at comparable universities. He added that the 5.8 per cent increase was a result of "a non-consolidated performance bonus payment" in 2010-11.
Times Higher Education revealed last month that the vice-chancellors at the 18 of 20 Russell Group universities to have published their accounts by 12 January received an average pay, benefits and pension package of nearly £318,000. The average increase for Russell Group vice-chancellors was 0.4 per cent.
Cardiff University is the only Russell Group institution yet to publish its accounts online.
Under the Sheffield pension changes, unions say, workers on the higher support staff pay grades were allowed to join the defined-benefit Universities Superannuation Scheme designed for academics, while those on the lowest grades were not.
Stuart Anderson, Unison branch secretary at Sheffield, said that for Professor Burnett to receive a pay rise "taking his total remuneration to...more than 20 times the pay of the lowest-paid worker, in the same year that the university effectively tore up many people's retirement plans, is obscene".
john.morgan@tsleducation.com.
To date Professor Burnett who according to the press "is a leading vice-chancellor", has not shared his good news with his fellow employees. I wonder why??
Posted by ceegee at 11:02:00 am No comments:

There are not many times in life where words cannot express the depth of disgust that you are feeling but this is one of them.

Of course traditionally the UK's policies towards discharged and injured members of the armed services has been patchy at best and absolutely lamentable at worst. You would hope that in the C21st matters would have vastly improved but in 2007 a report stated

"One in 10 homeless people in the UK are former members of the armed forces, a charity working with veterans says.
A survey in 1997 by the Ex-Service Action Group on Homelessness suggested that 22% of people who were "street homeless" had a military background."
This was cited as an "improving picture" and not a national disgrace. And given the current governments zeal in making people unemployed/unemployable I fear for a repeat of July 1918