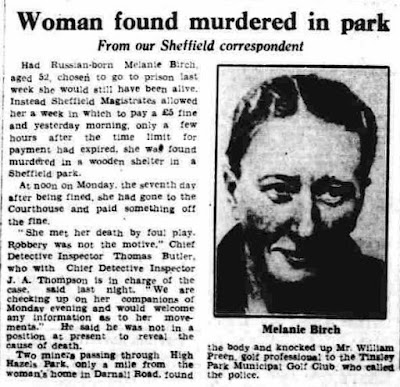 The death and the ensuing court case had a couple of interesting aspects and I must admit that I was surprised at the verdict given by the jury.

The other point of note is that Russian Edna is buried as Melanie Birch in Sheffield's Burngreave Cemetery. Buried in the same section of the Cemetery, is another Sheffield "character", a certain Billy Foulke.

I have just received these two local newspaper reports. They relate to the deaths of a married couple Christopher and Louisa Green who died three months apart in 1900. They both committed suicide by drinking spirits of salts (hydrocloric acid)

April 10th 1900
The Sheffield Coroner held an inquest at the George and Dragon Inn, Bank Street, this morning, on the body of Louisa Green, aged 39 years, wife of Christopher Green, labourer, of 17, Scargill Croft, who died on Sunday, from the effects of poison. Deceased had been a fairly healthy woman, but addicted to drink. Recently she complained of pains in the head, and said, “she wished she was dead”. On Friday night, whilst intoxicated, she drank about two ounces of spirits of salts, which she and her husband used for cleaning old medicine bottles. She did not tell anyone about it, and was somewhat better the next day. On Sunday she was taken ill, and went to bed at nine o’clock in the morning. Two hours later she told her husband what she had taken, and said she wished she had not done so. She also told her mother-in-law that no one was to blame but herself. She died shortly afterwards. It was stated that, when in drink, deceased had remarked she would drown herself, and on two previous occasions had drank some of these salts. She had been rather depressed lately, owing to being unable to get another house.
The jury returned a verdict of “Suicide whilst temporarily insane”.

July 23th 1900
An inquest was held at the Sheffield Royal Infirmary this afternoon, by the City Coroner, on the body of Christopher Green, aged 37 years, labourer, of Scargill Croft, who died in the institution from the effects of poison. The deceased was a hard drinker and on Wednesday afternoon came into the house intoxicated. He went upstairs and shortly afterwards shouted for his mother. He told her he had drunk some spirits of salts, which he used for cleaning old medicine bottles. He was removed to the infirmary and died on Friday night. The deceased’s wife committed suicide a few months ago by taking spirits of salts. Since his wife’s death the deceased had been in very low spirits and had threatened to take his own life.
The jury returned a verdict of “Suicide whilst temporarily insane”.

What is noteworthy about the couple is that they were related to Maria Laycock. Maria and her four children were murdered by their father Joseph in White Croft, Sheffield in July 1884. It was Sheffield's worst case of multiple murder.

I posted most of the details in the article Murder at White Croft - The Aftermath  An article on the tragedy itself can be found at Murder at White Croft. As one of their descendents pointed out, they do seem a rather dysfunctional family.
Posted by ceegee at 4:12:00 pm No comments:

The mother, the medium and the murder that changed the law - Frederick Nodder 1937

I had a pleasant surprise this morning when I received the news that an article I had assisted on had made it to the main pages of the BBC News website.

The journalist who wrote the article mailed this

"The story went up this morning and I was pleased to see how much made it through the editorial process. It has made it on to the news front page.

Here is the link http://www.bbc.co.uk/news/uk-england-nottinghamshire-37577247

Many thanks for your invaluable help.

Any questions and comments, don’t hesitate to get in touch."

I posted the article on "The Execution of Frederick Nodder 1937" many years ago. Apart from an excellent account of the trial(s) in the Famous British Trials series of books, there was very little on-line or in print about the murder and the main protaganists.

A few years after the article was posted, I was able to trace Nodder back to his birth in Sheffield in 1887 which no-one had done before.

As I said at the end "Frederick Nodder, the abductor and murderer of Mona Tinsley in Newark was a resident of Sheffield for much of his life - I wonder what his brothers, sisters and extended family thought of his actions?. It would be interesting to find out"

The Death of Patrick and Beatrice Conroy's child - June Sheffield 1953.

I have just posted an article to the site concerning The Death of Patrick and Beatrice Conroy's child - June Sheffield 1953.

The  papers relating to this case will not be released until 2029 under the 75 year rule, and so I have had to piece together events from newpaper reports. It is quite an unusual case inasmuch as it started out with a charge of concealing a birth and ended up with the parents of the child being tried and convicted for murder at West Riding Assizes in December 1953.

I was also able to use the cutting for an article I posted many years ago  - Death on Longley Crescent Sheffield 1953. which concerned the death of 25 year old John Hall at the hands of his father Charles. The difference between the two cases is staggering but the final penality was the same

The following is from the Sheffield Independent dated 5th April 1919 and refers to the planting of trees on Western Road/Gilott Street. They were to serve as a memorial for the former pupils of Western Road Council School who served their country in the Great War. 64 of those former pupils never returned

The teachers and scholars of Western Road Council School have adopted an excellent method of perpetuating the memory of former pupils who have served in the war.  Around the school in Western Road and Gillott Street 97 trees are being planted, sycamore and plane trees alternately in the former road and various trees in the latter.
A tablet will be placed outside on the school wall bearing the inscription:  “The trees in Western Road and Gillott Street were planted in grateful appreciation of the part taken by former pupils of this school in the great war 1914-1919.”  Later a carved oak tablet bearing the names of those pupils who fell in the war will be placed in the central hall of the school.  Altogether 401 boys from the school served in the war, 64 were killed, and 12 gained distinctions.
The first ceremony, the tree planting, took place yesterday afternoon preceded by a gathering in the school over which Councillor J. Kaye presided.  He said he considered it a magnificent scheme and impressed the boys with the necessity of seeing that the trees were kept free from damage.
Rev. V. W. Pearson delivered an address in the course of which he told the boys and girls that one of the things they could do for the service done for them by those whose memories they commemorated was to try to make England a place better worth living in.
Patriotic songs were well sung by the scholars, conducted by Mr. W. H. Cotton, head-master. And afterwards the scholars, with flags flying marched into the road where the trees were planted by Miss M. Maxfield, Rev. V. W. Pearson, Councillor J. Kaye, Messrs T. W. Quine, I. H. Morris, W. H. Cotton, Miss Hassall and Miss Corner, and the top boy or girl of each class.  The singing of more patriotic songs brought the ceremony to a close.

Nearly one hundred years later, this war memorial is to be decimated by the agents of Sheffield City Council. Whilst I admit the issue is a complex one, it should never be forgotten what these trees represent. All those concerned in the proposed destruction of this memorial should take this on-board but I feel somehow they won't

The Makers of Crookes, Sheffield - A Walk on Saturday, 7th January 2017

I received this information today from Brian Holmshaw about a heriatge walk that is he is leading in Crookes this Saturday.

"I know that you have a particular interest in Crookes and wanted to mention a walk I’m hosting in Crookes this Saturday. They are part of a series of heritage walks focussing on industrial and social history to co-incide with Year of Making Sheffield, one each in different suburbs of Sheffield. So far I’ve covered Neepsend, Little Sheffield, Hunter’s Bar and Heeley in the autumn. Crookes is planned for this Saturday, with Shalesmoor and the Antiques Quarter planned for February.

I have already let Anne Marples, and the folks at Crookes Forum and Walkley Forum know about it. But if you know of others that might be interested locally then please let them know."
Posted by ceegee at 3:20:00 pm No comments: