This blog is the 45th I've posted in 2022  which is an increase on 2021. I have also managed to post a few more articles to the site, one of which was Sheffield 1931. It was based on a newspaper cutting from ninety-one years ago today and reviews the year in Sheffield. I must admit I had a wry smile at times at the antics of Sheffield City Council.
It is a shame that that articles of this nature have more or less disappeared - when the local press could review the successes and failures of the city. Of course this year would be "interesting" with the closure of major city centre stores and the installation of shipping containers on one of Sheffield's main thoroughfares. There have also been a plethora of "green initiatives" which normally involve costs and disruption to the people of Sheffield. The people of Crookes and Walkley have been vexed this year  with "low traffic neighbourhoods" whereby the Council placed plant holders in the roads on an ad-hoc basis and blocked access to properties and businesses
I fear it will only get worse in the years to come
Anyway a big thanks to the many readers who have contacted me in the last year, I have been able to update a few of the earlier articles on the site with new information which is always a pleasure
And so all that remains is to wish everyone a happy and prosperous 2023 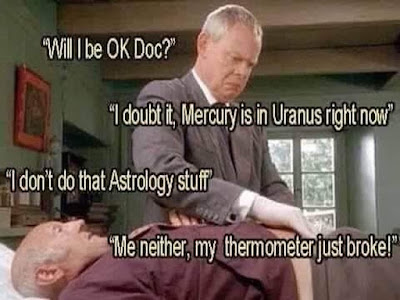 Email ThisBlogThis!Share to TwitterShare to FacebookShare to Pinterest
Labels: 1931 Sheffield

One of the first articles I placed on the site many years ago was one about the loss of life that occurred on 12th December 1940 when the Marples public house in Fitzalan Square was flattened by a Luftwaffe bomb. It was the single biggest loss of life in Sheffield during the whole war.

But there were a number of other occasions when lives were lost as a result of Luftwaffe activity. The last two people to lose their lives in Sheffield were George Macbeth and William Trevor Wilde. They were killed on Clarkhouse Road in Sheffield on Monday 20th October 1941 but their deaths were caused not by a German bomb but by an anti-aircraft shell that exploded in the road near to them. The Last of 631 Fatalities - Sheffield 1939-1945.

And so to round the articles off I thought that it would be fitting to ascertain who were the Sheffield's first air raid victims of the Second World War. I have just posted the article to the site 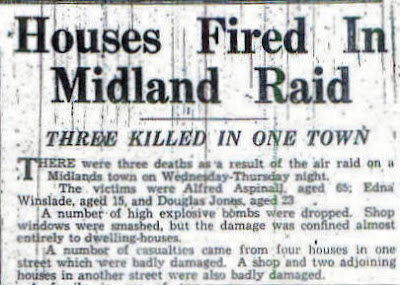 Of the three fatalities I noticed that two victims were taken to Sheffield's Royal Infirmary and it was at the hospital that they died from their injuries some hours later. But ALFRED ASPINWALL died at his home at 25 St Stephens Road which seems to indicate that he died at the time the bomb hit the property. And so ALFRED ASPINWALL was the first person to die in Sheffield from an air attack in the Second World War.

A young soldier who died on the Western Front during World War 1 has finally been laid to rest just yards from where he was found.

This was the strap line that appeared in article that appeared on a government website in November 2022 - Sheffield soldier of the Great War laid to rest 105 years after his death
It is quite a poignant article but ultimately an uplifting one as well. I wanted to know whereabouts in Walkley the Greaves family lived - and the 1911 UK Census provided an answer - 58 Channing Street. The Street is still there but the house was demolished in the 1960's. Channing Street is in Lower Walkley and now forms part of the Langsett Estate 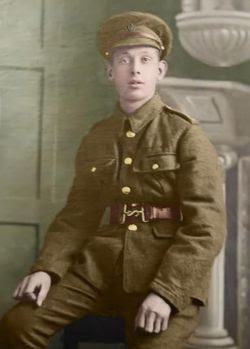 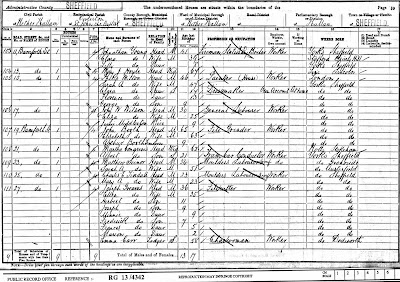 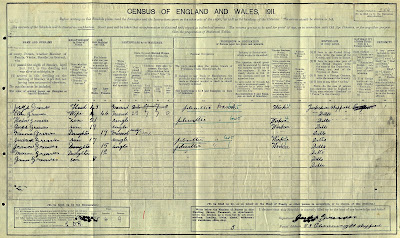 Quite a few years ago whilst I was in the Local Studies Library in Sheffield I came across this small report from a local newspaper which I scanned and saved. I found it profoundly sad that Alice had passed away whilst visiting her sons graves in France. It was nearly seven years after the war had ended and her grief was still there. 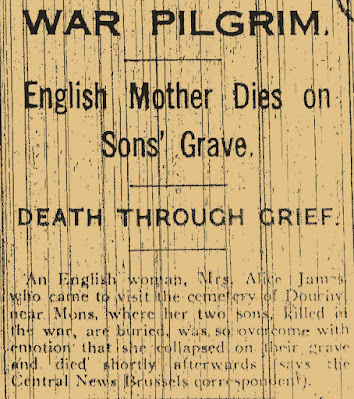 The articles are misleading inasmuch as they state that Alice collapsed whilst visiting the graves of her two sons. I checked with the CWGC site and found the following

The two sons are buried in different cemeteries. Alice collapsed and died whilst visiting the grave of her son Rupert. Her grief must have been overwhelming

I have just posted an article to the site - The Suspicious Death of Jadish Chandera Bhatta - Brinsworth Rotherham Friday 1st May 1931.

Jagdish's suspicious death was not the only one that occurred in Sheffield around that time. The deaths of Elizabeth Alice Smith in 1922 and Florence Hargreaves in 1926 are covered my site  - both deaths aroused controversy, and the verdicts that where delivered by the coroner and his jury were highly questionable. It is the same in this case.

The other interesting point to note is that I found it difficult to find local press coverage of the case. The above cutting is from the Scotsman dated 8th May 1931 and I found two more from the Manchester Guardian and Observer. The only notification on-line was from a Singapore newspaper - The Straits Newspaper dated 22nd May 1931 dateline Sheffield 9th May 1931. I could have used the cutting but I would have run the risk of ending up in Changi Goal for copyright breaches. The prohibition notice on the site was a fearsome one and a rather worrying development 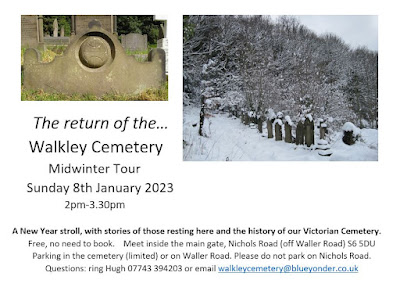 The Origins of Philadelphia Sheffield England

The photograph below was taken in November 2021 and shows Infirmary Road in Sheffield. The building in the centre is the former George 1V public house and to the left Paget's Builders Merchants. But for many years this area was known as Philadelphia - the name is rarely used nowadays and I am unsure why this is the case. The area is usually referred to by its street names Penistone Road and Infirmary Road and/or adjoining areas such as Shalesmoor, Upperthorpe or even Hillsborough
But the other day I came across this correspondence I had years ago with a fellow researcher who was also interested in the name Philadelphia and how it came to be used as a name for a district/area of Sheffield. These are our thoughts! The Quaker-Pennsylvania connection is interesting reading,, I realise that religious movements have been very significant engines of change. But back to the name Philadelphia. If I've understood your theory correctly, you are linking 'Phil' from St Philips (church) and a version of 'delph' from a dig, dugout area or similar. This does have the appeal of simplicity.

However, for me I would need to see a clear connection between the specified geographic area and the church's arrival. If, for example, we have a reference to Philadelphia that predated the 1828 St Philips consecration this theory would be dead in the water. The absence of such a reference may simply be that we can't find one, not that one doesn't exist. Incidentally, how do you know that the church owned this land, certainly prior to it being entitled Philadelphia?

I could easily buy the delph bit as it seems almost impossible that early development in this area, be it industrial or residential or both, was not accompanied by some sort of digging or earthworks. It could be that such a dig connected to raw materials for local industry, such as iron-ore or coal. This said, I still find it too much of a leap to actually get to the name Philadelphia without the local name's 'inventor' being unaware of the Pennsylvanian place. This was clearly in existence by the mid-to-late 1700's. Not only that, but given Philly's role in the developing colony, I find it hard not to suspect that even in late-18th century England, including Sheffield, the colonial Philadelphia was quite well known here.

My hunch is still that there is a connection [if only by name] with Philadelphia, Pennsylvania. I agree with you that I doubt Sheffield's Philadelphia was so named because of some steel connection.

My suspicion is that our Philadelphia connects by religion. This might not be a formal link, for example between a specific Sheffield Quaker church and the developing trans-Atlantic Friends movement of the 17th & 18th centuries. However, it could be that local Quakers looked to important developments in Philadelphia Pennsylvania and took the name for their community.

For this, however, I need to establish that there is some Quaker connection with the land around Gilpin Street. This could be a place of worship or it could be a concentration of Quaker residents. In itself this wouldn't prove my theory, but it would be strong circumstantial evidence.

Another key might be if the Gilpin Street area was being developed at the same time as the big push in the US to have their Philadelphia as a key Quaker location. This period, from your helpful link, seems to be the late 17th century/early-to-mid 18th century. I would have thought that by the third quarter of the 18th century the still colonial Philadelphia would be fairly widely known in England, particularly amongst English Quakers. The Friends would probably have looked to it as a key spiritual reference point.

In my 1841 Whites Sheffield Directory it lists the following names which are initially listed under the road "Penistone Road" and then under a separate heading for "Philadelphia."

I have just checked the directory section of the book and as an example it lists the following names from the list above,

Did you know that

1) the name Philadelphia is derived from the ancient Greek term for 'brotherly love.'

3) Philadelphia was also an ancient city of Asia Minor northeast of the Dead Sea in modern-day Jordan. The chief city of the Ammonites, it was enlarged and embellished by Ptolemy II Philadelphus (285-246 B.C.) and named in honor of him.

4) In addition to the well known city in Pennsylvania, there are other US name-sakes in Mississippi, New York and Tennessee

5) Philadelphia, Pennsylvania the "City of Brotherly Love," was founded in the late seventeenth century as a Quaker colony by William Penn

6) In the UK, Philadelphia is a village in Wiltshire just outside Bath, a district in Newcastle and of course a certain well know location in Sheffield

I came across this article from the Sheffield Daily Independent dated 31st December 1931. I was unable to ascertain the circumstances of the "street accident" that led to Walter's death but it must have been in the days running up to Xmas for there is a burial record for Walter at Christ Church Stannington Sheffield

However what I was unware of was the fact that the Sheffield Daily Independent newspaper ran a FREE INSURANCE SCHEME that covered both husband and wife for for fatal accidents and certain non-fatal accidents. In this case, Walter's widow Harriet received a payment of £50.00 just days after the funeral. At todays prices that would be nearly £2400 which must have been a useful sum especially if Walter was the sole income provider.

The other thing of note is the speedy settlement of the claim - four days after the funeral. How times have changed!!

Many years ago I posted an article to the site on The Phoenix Theatre Langsett Road Sheffield. And like many other articles on the site I have added information and material as it becomes available..

I was researching another article just recently and I cam across this obituary for Mr Frederick Phoenix, the proprietor of The Phoenix Theatre