Last week I recived an e-mail from an international publisher who wanted to use one of the photographs in the article for a book that it due to be published next year.The photograph in question was of 15 Ranmoor Park Road, Sheffield. It is the location of the events that led to the social disgrace and disinheritance of the Mr and Mrs Pochin. 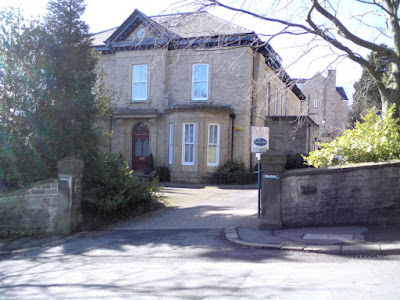 I revisited the article and decided to find out if anymore information had come to light in the interim about the victim of their cruel and vicious assaults - "the lad Wilkinson" as he was refered to by the court. He was in fact William Clarke Wilkinson who was only a 12 years old at the time of the beatings. He had been orphaned the previos year.

A combination of newspaper reports, census and BMD data enabled me to piece his life together after the assaults. It was a fascinating and at times sad journey

"Please find attached a photo of my Grandfather's brother's War grave in Harton Cemetery South Shields. He was a victim of the Beighton Rail crash and noting the date of his death may help you reconcile the numbers lost and when. I'm sorry I have no further information."

This is from the CWGC database 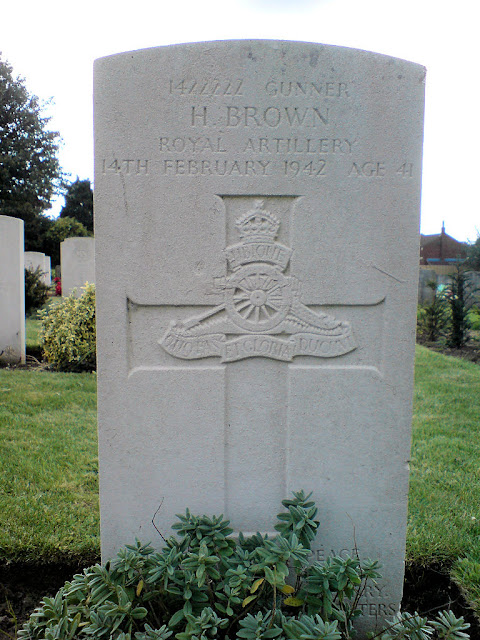 The interesting point to note is that unlike the other fatalities who have been identified to date, Henry did not die on either 11/12th February 1942. He died two days later on the 14th which seems to indicate that he survived the actual crash but died from the injuries he received.

If anyone can supply me with any additional information on Henry, please contact me and I will forward it onto his geat nephew

For quite a few years I have had this framed photograph stored in the attic but I did not know the date and location. 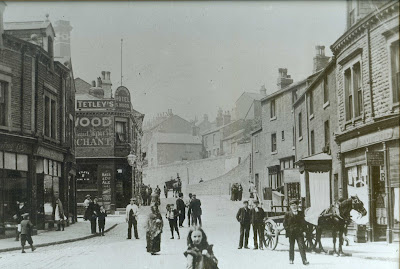 The only hint I had was that it was probably Yorkshire - the Tetleys sign - and possibly more West than East given the nature of the terrain. Also the fact that there were no cars in site made it date circa 1900.I did check "S Wood Wine and Spirit Merchant" and "Brunswick Hotel" in the on-line search engines but gor precisely no-where.

But I then put the terms into the British Library Newspaper archive and discovered that there was a Brunswick Hotel in the Morley district of Leeds. It opened in the late C19th which ties in with the photo. There is a current photo of the Brunswick Hotel on Flickr which is copyrighted but it appears that it shut its doors for the last time  circa 2005, and is now some rather depressing flats.

Of course the question that is puzzling me now is how I came to have a photo of a Leeds pub in the attic in the first place?.

This information was sent to me by a WW1 researcher who specializes in the North Derbyshire area.

Reginald Cammell , was the grandson of Charles Cammell Sheffield Steel Baron . He was the first airman to be killed while on active service . His father Archibald Allan Cammell was born in Sheffield (1856) and lived at Brookfield Manor Hathersage. The family company later merged to form Cammell Laird 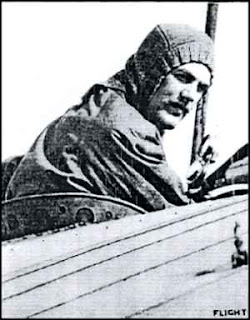 There is a picture of Reginald Cammell   in The Royal Aero Club Aviators  Certificates 1910- 1950  , he is listed as no 45 which means that he was the 45th person to be granted an Aviators Certificate ( the modern day equivalent of a Pilot’s Licence ) in Great Britain . If you scroll back to the start of the Certificates book you will see he some very illustrious contemporaries Hon Charles Rolls & Geoffrey  de Havilland

From the Dundee Courier - Wednesday 20 September 1911

HOW ARMY AIRMAN LOST HIS LIFE.
A Coroner's inquiry into the death of Lieutenant Reginald Archibald Cammell (24), of the Army Air Battalion, who was killed whilst making a flight at Hendon Aerodrome on Sunday evening, was held yesterday, the jury returning a verdict of "Death from misadventure." Mr Barber, of the Aeronautical Syndicate, who witnessed the accident, said deceased was making a practice flight on a Valkyrie aeroplane, but, making too sharp a turn, the machine backed, and coming over on its side slipped to the ground. The funeral of the late Lieutenant Cammell will take place at Aldershot to-day with full military honours.

His memorial has listed status

Yesterday I received two contemporary photographs showing the aftermath of the exposion that occurred at Messrs Southern and Richardson, cutlery manufacturers, Doncaster Street, Sheffield on 1st November 1899. Such was the ferocity of the explosion seven people lost their lives and several more were injured.

I placed an article on the site detailing the disaster a few years ago but this is the first time that I have seen photographs of the devastation. In fact I did not know if any existed and so it came as a marvelous surprise. 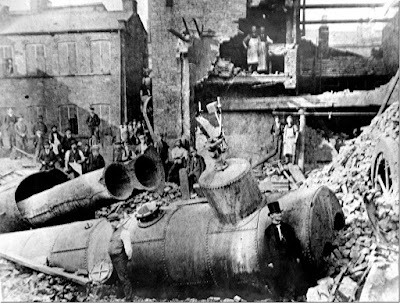 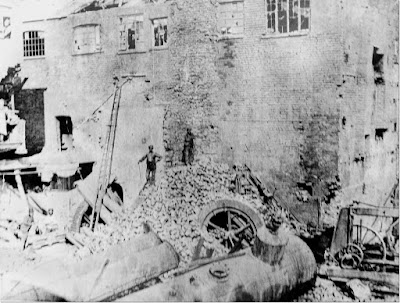 I've just posted an article to the site relating to the Rev W J Morrison's observations of women in March 1915. It makes for disturbing reading!

But what is even more alarming is that the Rev Morrison makes no mention of the actions of his former curate who only the year previously had been "over-familiar" with the 17 year old daughter of one of his parishioners. In fact he had "been familiar" on a few occassions with the young girl. But the outcome of his many advances had a ruinous effect on both himself and the girl in question.

St Peter's Church Abbeydale Sheffield was situated in Machon Bank Sheffield - it was demolished in 2003 after a 108 year history. I would have liked to place a photograph of the church in the article but I could not find one that is not copyrighted which is a shame. The land where the church once stood is now a community space whilst the congregation that used to attend St Peter's are now catered for by St Oswald's which is situated at the bottom of Bannerdale Road. 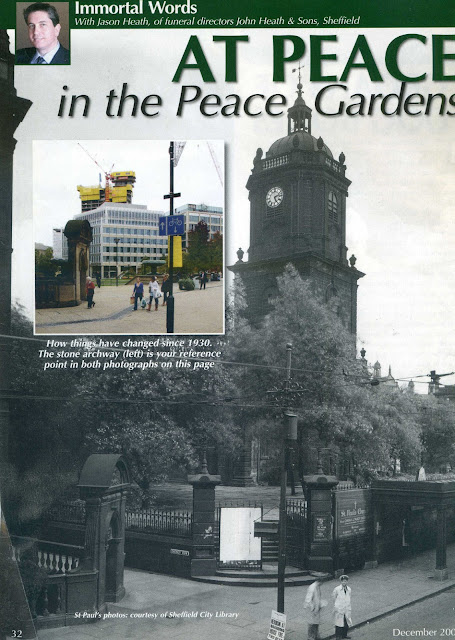 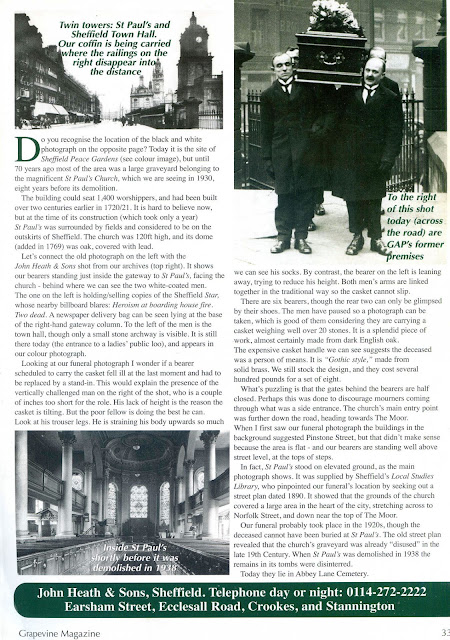 The church was demolished in 1938 as it was deemed to be redundant by the church authorities. Whilst I have to admit that it was no architectual masterpiece it was still a marvelous building  - the interior photograph of the church looks particularly impressive.

This cutting is from the Daily Independent dated 2nd November 1936 and refers to the opening of Sheffield's First Foot Hospital at 1 Northumberland Road. The building still stands today and has listed status. And by co-incidence was opened 80 years ago this week 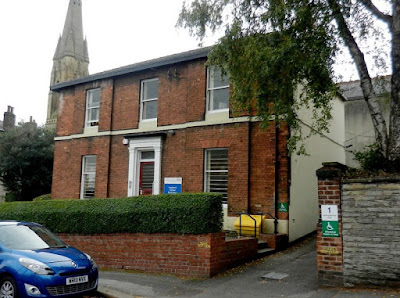 I came across this cutting purely by chance - a previous owner of the property in 1871 was a  landowner and gentleman called Mr John Bingley and he was the great grandfather of Herbert William "Billie" Thomas who I mentioned in earlier blogs.

The cutting also made me smile when the Lord Mayor of Sheffield admitted that he "had seen ladies perform various gymnastic feats to try and ease their feet." mmm

And the article also reminded me of the situation that exsisted in this country prior to the advent of the NHS - not an appealing prospect to say the least.

This photograph is of William Parker's magnificent monument in Sheffield's General Cemetery - William was one of the first burials in the cemetery in 1837, 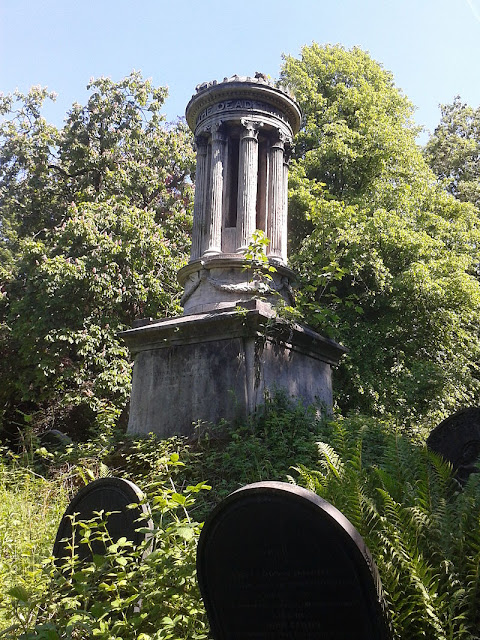 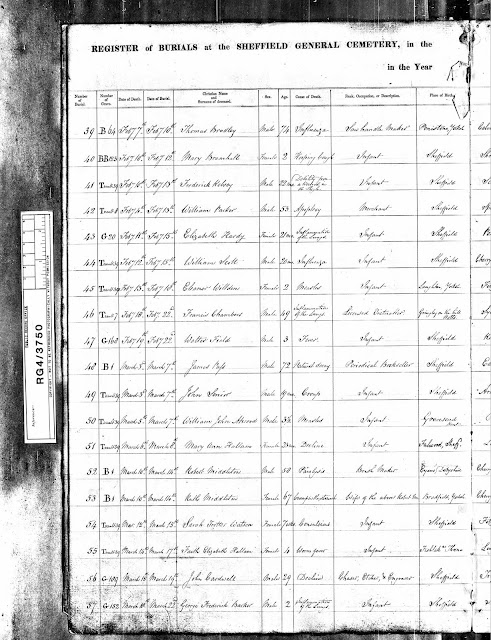 The problem I am having at the moment is finding any information about William. This is the content of the record

The death date is a transcription error - it should read 11th February 1837. And that is about it with regard to information and so any additional material would be welcome
Posted by ceegee at 5:15:00 pm No comments: