I've just posted an article to the site that I've being meaning to complete for he best part of a year.

Eleanor was murdered by an  unknown assailant in her draper's shop on Ecclesall Road on Saturday 13th January 1945. It as to be the last unsolved murder in Sheffield until June 1975 when a NCP car park attendant John Wortley was murdered in a city centre car-park

Th final touch was when I mentioned the case to some-one I met at the Sheffield and District Family History Society AGM a week last Monday (18th March 2013). She kindly searched the records of Ecclesall All Saints Churchyard and located Eleanor's last resting place. And then she  went and took a photograph of the grave 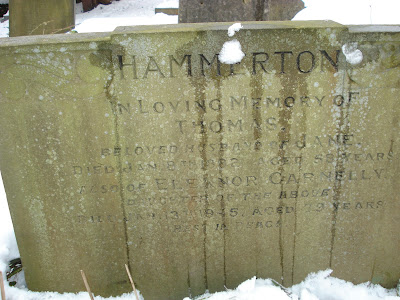 I was invited to give a talk on Monday night at the Sheffield and District Family History Society's Annual General Meeting. It was held at Cemetery Road Baptist Church which I believe is one of Sheffield's ever dwindling band of grade listed buildings

The title of the talk was
18th March – Sheffield’s Shocking Past
Chris Hobbs recounts some of the most gruesome and grizzly episodes of Victorian Sheffield.

Well Chris Hobbs did not recount episodes from Sheffield's Victorian Past. Instead he recounted just one incident from the era, one incidentally that has not seen the "light of day" since 1869.

It is always a bit of a risk, but by doing the talk this way I was able to bring out the main themes in the book - Sheffield's Shocking Past - and also focus on a particular event and its aftermath. It was, to summarise a demonstration of how I research an article.

I get the impression that most authors who are invited to give talks of this nature tend to give a precis of their book and little else. Well in Sheffield’s Shocking Past there are 61 deaths and to recount all or even a few of them, would far exceed the allocated time.It is far better to construct a talk using original material, and hope by doing this, you "inform and entertain the audience"
Posted by ceegee at 1:33:00 pm No comments:

I came across these photographs the other day - I had not seen them for years. The date back to the summer of 1976 when I went around Europe on an Inter-Rail pass 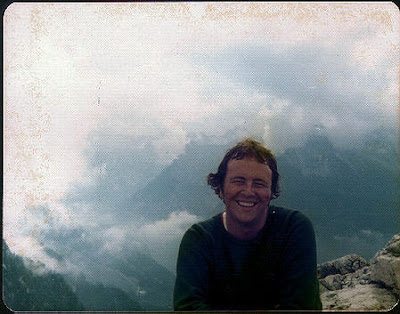 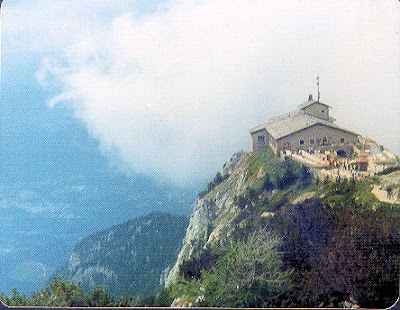 A much more youthful photo of me and a fine picture of the Eagle's Nest. There is a rather good web-site about the Eagles Nest or The Kehlsteinhaus to give it it's German name. When I visited it the site it was just really a very pleasant cafe with some fantastic views. The views are still there of course but it looks as though the cafe has received a major upgrade, and it has become much more of a major tourist destination with guided tours etc

It is also the highest altitude I've ever been to on foot - a shade over 6,000 feet. Whether or not, I will get higher than this in future is doubtful but you can hope I suppose
Posted by ceegee at 11:57:00 am No comments:


It is not often that a man of my advancing years gets a job offer never mind one that offers high wages and bonuses together with paid leave. I received this rather familar e-mail on Monday from a well known European company
"Good day!

Our company is engaged in sales of pharmaceutical additives. The company is well known all over the world, also in Europe. Therefore, in connection with the expansion of our production market is recruiting staff in your area.

To work needed representatives residing directly in the country, who can speak on native language and necessarily on English.

The main requirements to the applicant as follows:
- Accommodation in Europe
- Knowledge of the English language, as well as all reports and documents we have only English
- Responsibility and sociability
-Knowledge in the field of international bank transfers

Responsibilities:
-Talks with customers
-Control over payments in your area
-Record keeping
-Reports of all news to head office

As I fitted all the criteria I decided to go for it as they say. But when I did my background checks I found out  that the company concerned was not just a European one but a world-wide one with particularly strong links to Latin and South America and Asia. And then I realised that the "pharmaceutical additives" were not in fact pharmaceutical but non pharmaceutical. ie they were added to the pharmaceuticals afterwards as I way of keeping costs down and profits up

By this time I was becoming unsure, did I want to spend all my time in front of some weighing scales.on the kitchen table waiting for my new work colleagues to visit me . And the answer was No I did not. And so here I am writing this blog rather than "reporting news to head office" .

The First Bomb To Be Dropped

I've just finished reading "The Magnificent Spilsbury and the Case of the Brides in theBath"  by Jane Robins, that centres of the many criminal activities of George Smith. There is much to my surprise a "Sheffield connection" which I will have to research more thoroughly.

But the author does mention in the book a little known event in Dover (Kent) that was the first of its kind ever to happen on the British mainland - the dropping of an aerial bomb from an "aircraft" for want of a better word.

The details are as follows

At around 11 in the morning a single German Taube airplane, flown by Lt. Von Prondzynski, crossed the Channel and arrived over Dover . The pilot pulled a bomb from the cockpit floor, and dangling it over the side of his machine apparently aimed it at Dover Castle , a pretty sizeable target. He missed by 400 yards. Instead of hitting the symbolic castle guarding the coast the bomb landed on a kitchen garden on Leyburne Road. The explosion excavated a crater about four feet deep in the plot, and broke a few windows of the nearby rectory of St James’ Church. And it did claim one casualty, the rectory’s gardener Mr Banks, who had been pruning a tree and was knocked to the ground by the blast. Banks was only bruised and battered, and lived to tell the tale, as did the German pilot who veered off back to Flanders and safety.
In a neat piece of historical symmetry Dover would be the last British town to suffer an air raid just before the Armistice in November 1918 ".

"Fragment of the first bomb dropped on English soil during the First World War. The bomb, which landed near Dover, at 10.45 a.m. on 24th December 1914, was dropped by a single German aeroplane which then went home. Three days before a German aeroplane had made its appearance above Dover and had dropped two bombs which, aimed presumably at some part of the harbour, had fallen harmlessly into the sea. This fragment was presented to King George V by the Anti-Aircraft Corps, Dover. Nearly 9,000 German bombs of a total weight of 280 tons were dropped on British soil in fifty-one airship and fifty-two aeroplane attacks during the First World War. In all 1,412 people were killed and 3,408 others were wounded as a result of these raids, London suffering more than half of the casualties -670 killed and 1,962 injured."