Nick Clegg - A Man for All Sports

I am starting to wonder if Nick Clegg is hankering after sporting greatness. I caught a glimpse of him at the Champions League Final in May sitting in the best seats next to Mugabe's dear friend Sepp Blatter. And then blow me whilst Prime Minister Cameron was preparing to do his bit in Helmand province (Afghanistan), his deputy and wife were presiding over Centre Court at Wimledon for the Men's semi-finals. They were naturally in some of the best seats! In fact he is starting to look imperious, and aloof, something that the people of his constituency are starting to find vexing but I'm sure that he was at these venues "fighting for Britain" 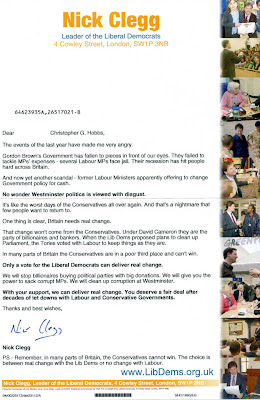 I wonder where he and his family was lucky in obtaining tickets for the 2012 Olympics - many British people did not get any even though they are funding it!
Posted by ceegee at 1:35:00 pm