Sold Date: 05/19/2012
Channel: Online Auction  Source: eBay UK
Category: Militaria & Weapons
WWI British War Medal and Victory Medal with ribbons, marked with the name Pte G Sandy Yorks & Lancs, who I believe was a friend of my Grandmother.
Both medals and ribbons are original and came from her house. Any question please ask.
I've just remembered. my Grandmother said that the G was for George. As adding this note I've noticed that the name I've typed is wrong, it's Sanby not Sandy.

I should mention that George Sanby was my gran's cousin, and is buried in Walkley Cemetery Sheffield

To say I was dumbstruck with this revelation would be an understatement. 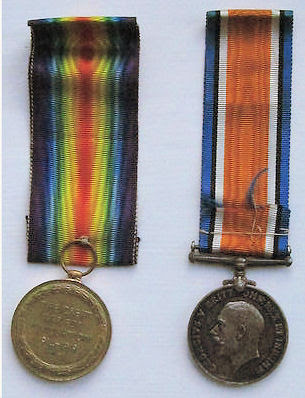 The seller did include a photograph of the medals which are pictured above.

And so it looks as though the medals are now in the hands of a collector and not the family.
I have also just accessed George's World War 1 Service record. It notes that the medals were sent to THORNHILL UNWIN, George's father in law, who was his next of kin after the death of his wife Maud. I can only assume that the grandmother the seller identifies as the previous owner of the medals must have been either the daughter or grand-daughter of Thornhill Unwin.
Posted by ceegee at 12:55:00 pm